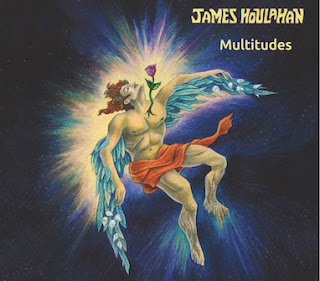 Originally based in Boston, James Houlahan was a member of The Jody Grind and Dogs On Television. He released his first solo album in 2009, and soon after that made the move from Boston to Los Angeles. His new album, Multitudes, is his third solo release and it includes all original material, showcasing his impressive songwriting. There are some fantastic songs here, and in addition to vocals and guitar, James Houlahan plays Omnichord on several tracks. On this CD he is backed by Fernando Perdomo on bass, Mike Gattshall on drums and Esther Clark on backing vocals, with several wonderful guests, including Danny Frankel on percussion, Kaitlin Wolfberg on violin and viola, Danny T. Levin on horns, and Erik Kristiansen on pedal steel guitar. Check out the instrumental sections of “Mystery Earth Song” for a great example of what this group can do.

James Houlahan kicks off the new CD with “Fires Of Mercy,” a song with a very cool vibe, like a twisted, dark, personal carnival populated by ghosts, by apparitions. It’s a carnival where we are both barker and mark, and sounds like a delightful, lonesome waltz into hell. “Well, the moonlight tonight is like fire/Upon the dark face of the lake/Where I held you and drowned you and left you for dead.” This is one of my favorite tracks. It’s followed by “Delta Heart,” which has a much different feel, more positive and kind of sweet, kind of happy. It has a vibe that is part nostalgic, part celebratory. And the song takes on a groove you can dance to, with lyrics you might find yourself singing before too long (especially when Esther Clark joins in): “Out on the river, out on the sea/I dream of home, I dream of thee/And though my travels are far and wide/I carry you deep down inside.” And I love the horns! Oh yes, there is certainly a New Orleans flavor here that is wonderful. This is another favorite (and yeah, this is only the second track).

Then “The Rogue Song” is more in the country rock realm, with a bluesy edge. There is something really fun about this track, partly because of James Houlahan’s playful vocal delivery at times. It is from this song that the CD gets its title, and it’s actually a reference to Walt Whitman’s “Song Of Myself,” in which Walt writes: “Do I contradict myself?/Very well then I contradict myself,/(I am large, I contain multitudes.)” Here James Houlahan sings, “Do I contradict myself/Well, so let it be/Like the angels in the heavens I’ve got symmetry/Multitudes pouring out from every side/There’s a rumbling in the earth, there’s a music in the sky.”

Another highlight is “See Me Through,” a love song and road song that has a kind of sweet tone over a steady pulse and groove. “But she danced and smiled in my weary head all the way/She helped to pass the time, yes she did/Like a stowaway in my lonely heart where she slept.” “Morning Sun” is also a love song, a truly pretty song in the folk realm. I love the blending of male and female vocals here, giving the tune a less lonely feel than I think it would otherwise have. And “I hope that you don’t run from the darker side of me” is one of the best and truest lines of any song I’ve heard in a while.

I’ve mentioned this a couple of times before, but I really need to make a mix CD of songs titled “Home.” There are lots of them, and I still haven’t heard a bad one. James Houlahan’s “Home” is a sweet folk/country song, with some nice work on pedal steel. “And I finally knew when I saw you/That home is wherever you are tonight.” (If you want to hear some other good songs titled “Home,” check out tunes by Ellis Paul, Erica Blinn, Michelle Malone, The Evangenitals, The Spongetones, The Ides Of March, Joe Walsh, Iggy Pop and Anton Fig.) The album then concludes with “Joyful Circuit,” another beautiful love song.

CD Track List
Multitudes is scheduled to be released on April 15, 2016.
Posted by Michael Doherty at 3:12 PM