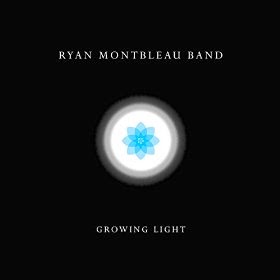 I got turned onto Ryan Montbleau five years ago, when he released Heavy On The Vine, an impressive album which found him mixing genres. His new release, Growing Light, might be even better, and once again finds him mixing various genres, including folk, rock, and a good bit of funk. This is a highly enjoyable disc, and it seems the whole band is having fun. All but one of these tracks are originals. Martin Sexton produced Heavy On The Vine, and at the time of that release, Ryan Montbleau Band both opened for Martin and worked as his backing band. There were some obvious similarities heard in Ryan Montbleau Band’s sound. And though the new CD is produced by Ben Ellman (of Galactic), the sound still at times reminds me of Martin Sexton, sometimes in the playful, lively approach to the music, like on “Inevitable.” And listen to those vocal chops on a song like “Throw Me Away.” Growing Light was recorded in May of 2013 in New Orleans, and certainly some of the energy of that great city can be heard on these tracks.

Ryan Montbleau Band opens this album with its title track, “Growing Light,” which starts off quietly, beautifully, and quickly proves itself a gorgeous and moving song. It’s one of my personal favorite tracks from this release. Here is a taste of the lyrics: “I find myself nicer to my brother/Think about my family, I’ll even call my mother/Maybe tell her that I love her/Tell her I found someone who understands me/That I’ve been thinking about that scene from Bambi/I know that’s not all that manly/But I’m like a little kid on candy/And when we go out, the stars align/They align so bright/You and I in the garden growing light.” So beautiful.

The following track, “Inevitable,” is one that reminds me a bit of Martin Sexton. Ryan Montbleau gets quite playful on this track, particularly the way he sings the word “Inevitable” early in the tune. It’s totally delightful. And you can hear a Stevie Wonder influence as well. Things then take a funkier turn with “Pacing Like Prince,” which is also a hell of a lot of fun. And I love lines like these: “I learn to love the words/Learn the definitions/I wax poetic by the candlelight/And if it gets above my head, I get it/If it sinks below my feet, I learn to let it go.” And the main line of the song is “Pacing like Prince in Purple Rain.” (And just to note another connection to Martin Sexton, “Purple Rain” is a song that Martin has covered in concert – one of the two best versions I’ve ever heard, actually – the other being by The Evangenitals.)

Ryan Montbleau Band gets a little funky on “Those Things” as well, another of this CD’s highlights, a nice dose of nostalgic musings. The opening lines are: “Can we do the things we used to do/Be the way we used to be/When I used to see more of you/You used to see all of me.” I love the feel of this song, the somewhat relaxed groove. Ryan Montbleau Band keeps the funky 1970s-type grooves going with “Loving You,” the album’s only cover, a song written by Johnny Guitar Watson, and originally included on his 1973 LP Listen. The line from this song that always stands out for me is, “You’re all there is and then some.” Also having a bit of a mellow funk vibe is “Glad,” written by Ryan Montbleau and Matt Giannaros. These lines always make me smile: “What would you think if I asked you to dance/I'll watch what I do with my hands.”

Growing Light concludes with “Together,” a sweet and sad acoustic number that is one of my favorites. It's so bloody beautiful and depressing, opening with these lines: “I'm not the way I'm supposed to be/I'm supposed to be thankful for what I've got/Things are not the way they're supposed to be/She's supposed to be here, and she's not/And if I was younger, the stakes wouldn't seem so high.” I love this song, and I know it's one I'm going to be returning to often.