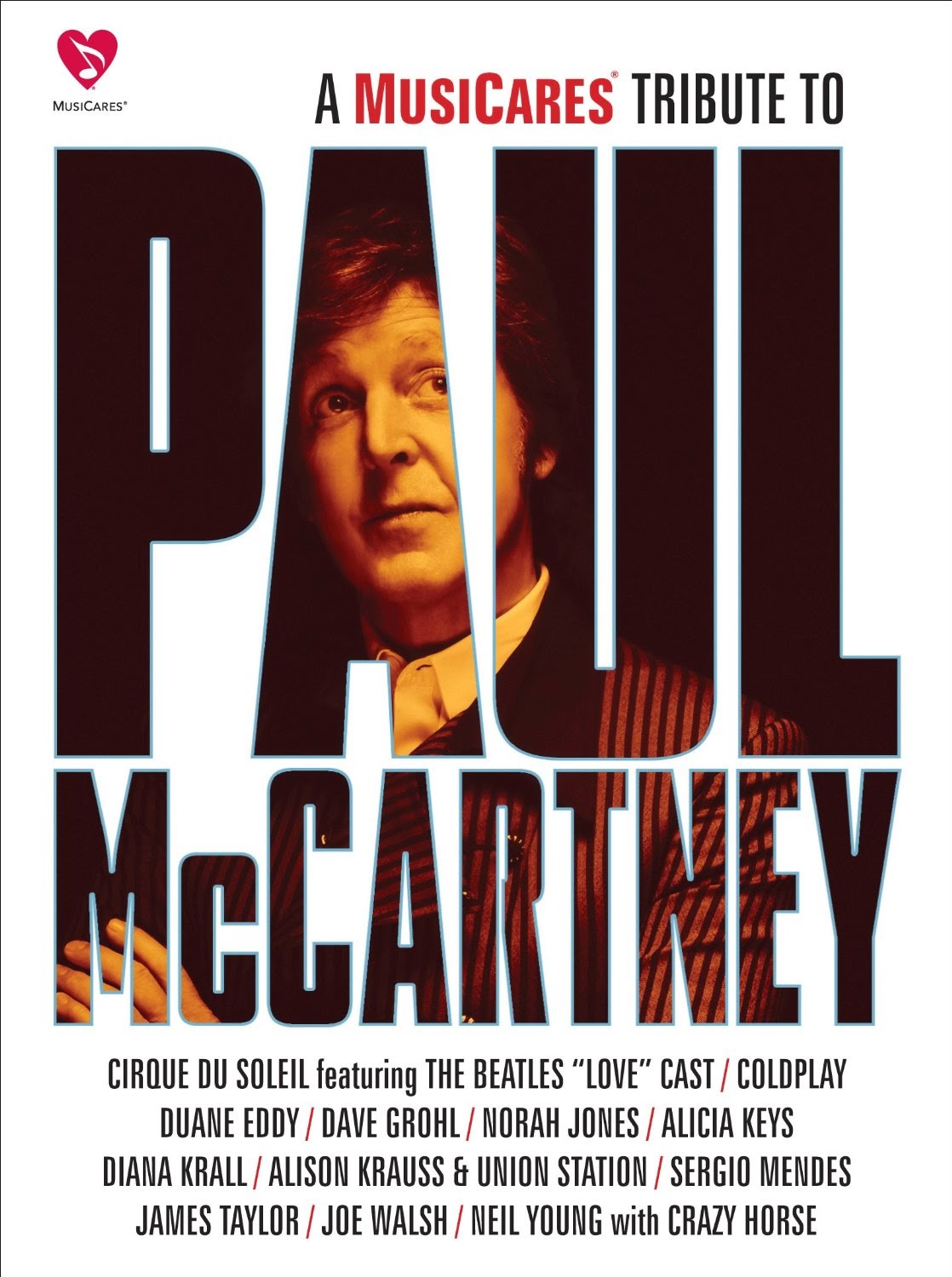 In 2012, Paul McCartney was named MusiCares Person Of The Year, and a special concert was held in February of that year to celebrate, with lots of excellent musicians performing his compositions. Now Shout! Factory is releasing that concert on DVD and Blu-ray.

A MusiCares Tribute To Paul McCartney begins with folks in goofy costumes dancing to a medley of Beatles tunes, including “Get Back.” It’s silly and pointless (remind me to avoid Cirque Du Soleil), but is over in like four minutes. And then the concert begins. Paul McCartney himself plays first, leading off with “Magical Mystery Tour,” and then going into “Junior’s Farm,” a song I’ve always loved (and one I hadn’t heard in a while). This is a joyful performance, with plenty of energy. “Let’s go, let’s go, let’s go, let’s go.” I could do without the shots of famous people in the audience. I don’t give a shit who was there; I’m only annoyed that I wasn’t.

Alicia Keys plays “Blackbird” on piano. I’ve certainly heard better renditions of this one. She tries to add a little too much to it vocally, which is unnecessary. Much more interesting is the take on “No More Lonely Nights” by Alison Krauss And Union Station, with Jerry Douglas.

Duane Eddy does a sweet instrumental rendition of “And I Love Her,” and Norah Jones does a pretty version of “Oh! Darling.” Perhaps the biggest surprise is Neil Young And Crazy Horse choosing “I Saw Her Standing There.” They give a good extended rocking version, with brief pauses after “boom” and “room.” And Neil shouts out to Paul at the end.

Sergio Mendes’ version of “Fool On The Hill” features three women on vocals. It’s kind of a cheesy rendition, but has a little “Day Tripper” tease at the end, which is nice. Coldplay does a mostly acoustic version of “We Can Work It Out,” which surprisingly works well.

The show also includes the presentation of the award, and Paul’s acceptance speech. Paul then performs what was at the time a new song, “My Valentine.” Joining him for that very cool number is Diana Krall and Joe Walsh. Paul then gets on the keys for “Nineteen Hundred And Eighty Five,” and “Golden Slumbers” into “Carry That Weight” into “The End.” “Golden Slumbers” is such a beautiful song, and I love that moment when it segues into “Carry That Weight.” During the drum section, Paul switches to guitar for a great, extended ending. This is obviously another of the concert’s highlights.

The DVD is approximately an hour long, and contains no special features. There are liner notes, however, with photos and information on The MusiCares Foundation, as well as a short biography of Paul McCartney. A MusiCares Tribute To Paul McCartney is scheduled to be released on DVD and Blu-ray on March 24, 2015 through Shout! Factory.
Posted by Michael Doherty at 9:56 PM