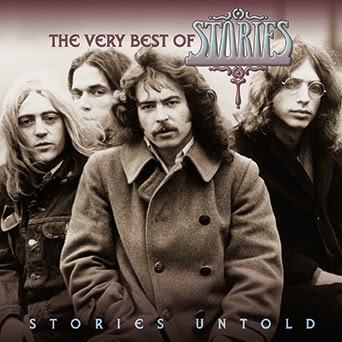 Stories Untold: The Very Best Of Stories is the first compilation of music by Stories, and is an interesting mix of rock, pop and prog rock (like “Please, Please,” for example, which reminds me a good deal of Rush at times). This is an unusual compilation, for not all the tracks here are attributed to the band in question. In fact, the first couple of tracks are really Left Banke songs, though released under singer Steve Martin’s name. And the final several are from Ian Lloyd solo albums. It really shows the evolution of these songwriters and musicians over a specific and relatively short period of time, and so isn’t simply a “best of” compilation. But of course it contains the band’s big hit, “Brother Louie.”

Stories Untold opens with “Love Songs In The Night,” one side of a single released in 1971 by members of The Left Banke. It’s kind of a catchy tune with an interesting vocal delivery by singer Steve Martin. “Two By Two (I’m Losing You),” the other side of that single, is a good song that seems to owe something to the late 1960s folk groups in the way the vocals are tackled in the verses. But it is the sound of the chorus that I particularly like in this track.

There is a light, breezy feel to “I’m Coming Home,” the first song of the compilation actually attributed to Stories. I love the totally delightful sound of the keys on this track. And there is clearly a Beatles influence in the vocal approach (particularly Paul McCartney). Released as a single in 1972, the band’s first single, this song reached #42 on the Billboard Hot 100.

Another very playful and fun tune is the fast-paced instrumental “Circles,” composed by Michael Brown and released under his name, not as a Stories single. This is actually one of my favorite tracks, and it makes me smile every time I listen to this CD. “Darling” is also a really good tune. The version presented here is the single version, released in 1973. It didn’t do all that well, but is a catchy song written by Michael Brown and Ian Lloyd.

“Brother Louie” is the song the band is really known for. It’s their big hit, reaching #1 on the Billboard Hot 100. Interestingly, it’s the first song of the compilation not written by Michael Brown or Ian Lloyd. It’s a cover, written by Errol Brown and Tony Wilson, and originally recorded by Hot Chocolate. The song has a nice dance rhythm, a good message, and memorable vocals.

“Stories Untold,” the song that gives this compilation its title, is an interesting tune written by Ian Lloyd. I particularly like its instrumental section.

A song I can’t help but love is the happy, cheerful “If It Feels Good, Do It.” It has a simple, but positive message about following one’s own counsel, one’s own feelings. “Let your senses be your guide/Forget about the rules/If it feels good, do it/Do it if it’s what you feel.” Plus, it’s a fun song, reminding me a bit of Sweet.

Interestingly, that is followed by a song about a bisexual man confessing to his girl that he’s got another lover. Titled “Another Love,” it features lines like “But girl, I think it’s time you knew where I go when I leave you.” He assures her that his love for her is just as strong, telling her “You’re the only woman for me.” Written by Bobby Flax and Lanny Lambert, this song was released as a single in 1974.

“Slip Away” is a fun song written by Ric Ocasek, with a bit of a new wave feel and a bouncy vibe. Released as a single by Ian Lloyd, this song reached #50 on the chart.

I was nine years old when the first couple of Joan Jett records came out, and I couldn’t get enough of them. A lot of those tracks were covers, and she did a great job with them. At the time, I had no idea who Gary Glitter was, but I loved “Do You Wanna Touch Me (Oh Yeah).” The same year that Joan Jett included that song on her first album (soon re-released as Bad Reputation), Ian Lloyd released his own version of the song on an LP and as a single. It’s a good rendition, fairly similar to Joan Jett’s take, and it’s this track that closes this compilation.

Stories Untold: The Very Best Of Stories was released on September 30, 2014 through Real Gone Music.
Posted by Michael Doherty at 6:58 PM