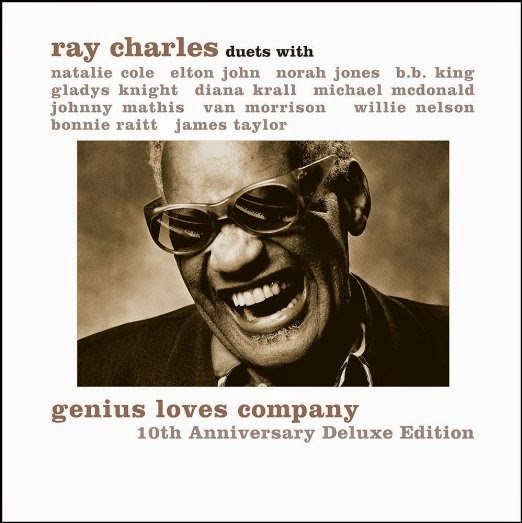 If you like music, you like Ray Charles. There’s just no way around that. In June of 2004, this world lost one of its greatest singers and musicians. That summer also saw the release of his final studio album, Genius Loves Company, a CD of duets with some of music’s great talents. Now, to mark the tenth anniversary of that release, we are treated to a deluxe edition of the album, with a couple of bonus tracks, expanded liner notes and a DVD.

Norah Jones’ voice begins this CD, as she takes the first verse of “Here We Go Again.” This song was released as a single and earned a much-deserved Grammy Award for Record Of The Year. It’s a wonderful duet, and a great rendition of a fantastic song, one which Ray Charles first recorded in 1967. Both Norah and Ray play keys on this track, and Billy Preston joins them on Hammond B3. I love the playful quality in Ray’s voice on the line “I’ve been there before, you know what, I’ll try it again.” And then they sound gorgeous together at the end.

It might seem like an odd combination – Ray Charles and James Taylor – but they do a surprisingly delightful take on Taylor’s own “Sweet Potato Pie.” This song has such a cheerful sound, and there is a horn section.

One of my favorites is “You Don’t Know Me,” a gorgeous gem. Ray Charles has always owned this song, and here he does a sweet version with Diana Krall. Ray’s vocal performance here is absolutely perfect, and Diana’s voice works so well with Ray’s, making this track one of the CD’s highlights.

“Fever” is a song I always dig (except for Madonna’s awful version), and of course Ray Charles does it right. Natalie Cole is a great choice to join him on this tune. She has some fun responding to him late in the song (“Oh, it’s your story?” and “I'm listening”). And listen to the way Ray Charles sings “What a lovely way to burn” toward the end. Perfect! And the band backing them really grooves.

I’m a big fan of Willie Nelson’s work and his voice, but one of the odder duets is Ray and Willie Nelson’s take on “It Was A Very Good Year.” There are great orchestral swells, which seem strange with Willie Nelson’s vocal style. But it's a track that has definitely grown on me. Willie Nelson also appears on Friendship, Ray Charles’ 1984 album of duets (they do “Seven Spanish Angels”).

One of the highlights of this CD is the blues tracks, “Sinner’s Prayer,” which finds Ray Charles working with B.B. King. Billy Preston also appears on this track, playing the Hammond B3. This is some delicious and glorious blues, with some very cool playing by Ray Charles.

The original album concludes with the only live track, a nice rendition of Van Morrison’s “Crazy Love,” sung with Van Morrison. This track was recorded on June 12, 2003 in New York.

This 10th anniversary edition CD includes two bonus tracks. The first is “Mary Ann,” the only track actually written by Ray Charles to appear on this CD. On this version he performs with Poncho Sanchez on percussion. Dale Spalding provides some nice work on harmonica, helping to make this a really fun track.

The second is a version of “Unchain My Heart” performed by Take 6, an a cappella group. Ray Charles is actually not on this track.

The DVD contains the documentary The Making Of Genius Loves Company, which is just under an hour in length and includes interviews with many of the people involved in the project. It opens with Ray Charles saying, “If you can sing what’s in your heart and keep time, that’s it.” It includes some still photographs, but also lots of great footage of the production of the album. Each track is discussed, with a focus on certain songs (like “It Was A Very Good Year,” “Sorry Seems To Be The Hardest Word” and “Here We Go Again”). Norah Jones mentions that she chose “Here We Go Again,” and that she added her piano part after the rest of the instruments had been recorded. There is also some footage of Ray Charles talking about Norah Jones.

In addition to Norah Jones, there are interviews with Bonnie Raitt, Johnny Mathis, Willie Nelson, Michael McDonald, Elton John and Poncho Sanchez. There is some very cool footage of “Sinner’s Prayer” being recorded, and some footage of the performance of “Crazy Love” with Van Morrison. There are also interviews with John Burk (producer), Joe Adams (Ray Charles’ manager), Victor Vanacore (arranger, conductor), Phil Ramone (recording producer, engineer) and Al Schmitt (recording engineer). And there is a bit of footage from the Grammy Award ceremony.