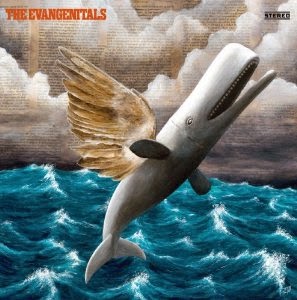 I’ve been enjoying The Evangenitals for many years now. This is a band that’s gone through a lot of changes since I first saw them in concert. But there are a few things that remain constant. First, the core of Juli Crockett and Lisa Dee – they’ve been the heart of this band since its inception, and ensure that the music will always come from a place of pure passion. Second, Juli and Lisa Dee surround themselves with damn fine musicians. The band members may change, but they’re always seriously talented people. And third, Juli Crockett writes excellent songs.

All but one of the tracks on their newest release, Moby Dick; Or, The Album, are originals. And some of these tunes, like “The Lee Shore” and “Quee Queg,” they’ve been performing live for a long time. So the songs have had the chance to be developed, explored and really worked to perfection. This is an album that was long in the making. I think it was once they had "Ahab's Leg," their third Moby Dick-related song, that they began talking about recording this album. If memory serves, that was in 2009.

The album kicks off with “Ahab’s Leg,” a song I’ve always enjoyed seeing them perform in concert. The version here is a much slower, more thoughtful, even haunting version than what was played live when the song was introduced several years ago. It has a very different feel, but completely works. And then approximately three minutes in, the song has a strange section, featuring keyboards and male vocals, and the song then rebuilds from there, gaining a certain power. Jeremy Zuckerman plays electric guitar on this track.

“The Sermon” is an odd song with a great gospel vibe. The gospel angle is interesting, particularly in relation to the band’s name. Here Evangenital comes closest to Evangelical. Dorian Wood provides vocals on this track. Can I get an Amen?

That’s followed by “Shipwreck Blues,” which begins with whale-like sounds. This is the album’s only cover, written by Bessie Smith. The rendition by The Evangenitals is pretty, with a vocal approach that is at first delicate and gorgeous. This version has a slow methodical rhythm that has a haunting, foreboding quality. The pace then picks up toward the end. Kris Tiner plays cornet on this track.

“Turbulent Flow” is a new one to me. It has quite a different feel from what I’m used to from this band. This song is more in the pop realm, with a playful, goofy vibe that is kind of delightful. It’s almost like something The B-52s might do. “Turbulent Flow” was co-written by Juli Crockett, Michael Feldman and Joey Maramba.

With “Moby Dick,” the band goes for a wonderful old-time feel, partially like a traditional folk tune, one of those wonderful sea chanteys that tell a great story. Daniel Mark and Jim Kweskin add some wonderful work on mandolin and banjo respectively. And Danny Graziani does excellent stuff on violin. “Moby Dick” was co-written by Ron McElderry and Juli Crockett. Apparently, McElderry wrote the original version in 1960, and then Juli Crockett added to it. So in a way, this song is almost like the album's second cover.

Whenever I’ve been asked what my favorite Evangenitals song is, I’ve always responded, “The Lee Shore.” It’s an incredible song, a wonderful journey, with peaks and valleys. It’s a song you can really get immersed in, a song that can possess you if you let it. And you should let it. When the band really nails it, there is little that is better, and it has often been a highlight of their live shows. I love Andrea Baker's work on violin. Princess Frank is on drums on this version. (I love Princess Frank, particularly his work with Holland Greco.) "Breathe out...Breathe out...Breathe out."

The album concludes with "Quee Queg," a song I've loved for years. There is a sweet beauty to this song, particularly in the way Juli and Lisa Dee's vocals blend. And it's wonderful that David Hurlin plays drums on this track. He was the band's drummer when I was first really getting into their music, and though I enjoyed hearing how the different drummers tackled this song over the years, David's approach remained my favorite.

There is a hidden track at the end of the CD. It's a bit of silliness that's approximately thirty seconds long.

Posted by Michael Doherty at 10:26 PM