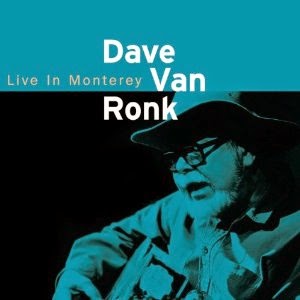 The new Dave Van Ronk CD, Live In Monterey, is a live solo performance from April 4, 1998 – just him, his acoustic guitar, and that distinct voice of his. I love that voice. It is nice and rough, and might suddenly, briefly turn into a growl, as toward the end of “Jesus Met The Woman At The Well.” Then check out how smooth he sounds singing “Winin’ Boy Blues.” And then his voice gets delightfully silly on a tune like “Candy Man.”

Dave Van Ronk was certainly one of the greatest folk performers of all time, and this live album gives you a good taste of what he was about. If somehow you’ve never heard him before, this CD would certainly serve as an excellent introduction. He was a great storyteller and a damn good guitar player.

Live In Monterey contains nearly an hour of music. These are mostly covers, but he really can make you take a fresh look at a familiar song. For example, check out his seriously cool rendition of the Mississippi John Hurt song "Spike Driver Blues." His vocal delivery on that tune at times is like an intimate whisper, and other times is smooth. And the guitar work is nearly hypnotizing, haunting. For good measure, he also covers Tom Paxton’s “Did You Hear John Hurt?” This CD is a good clear recording too. The CD includes liner notes both by Rick Chelew and Happy Traum.

Live In Monterey starts right up with “You’ve Been A Good Old Wagon But You Done Broke Down.” No introductions or stage banter or audience noise at the beginning, this disc just gets right to the music. This is a fun tune, with a bit of the Van Ronk scat that at moments is like a wild screech. And check out what he does with his voice on the last few lines.

“Blood Red Moon” is one of the album’s original tunes, and it shows his sense of humor with lines like, “She took a two by four, hit me upside my mouth/Started running north, but my teeth were headed south.” And for some reason this line always makes me smile: “That moon is rising/Giving me the evil eye.” This song ends with the lines “I’m going where that blood red moon can’t shine/I’m going where that blood red moon can’t shine/Well, I’ll go back home to Brooklyn where I’m lucky all the time,” sung like a variation of “I’m going where the water tastes like wine/We can jump in the water, stay drunk all the time.” This song was included on his 1985 release, Going Back To Brooklyn.

“Losers” is another Dave Van Ronk original, and another that was included on Going Back To Brooklyn. It’s a very cool tune, with a sense of humor and a truly peculiar vocal delivery that is absolutely wonderful. I love the way he varies his delivery, the way a storyteller would to keep his audience attentive. This song includes a reference to Saint John Wayne in these delightful lines: “When God appeared to Saint John Wayne/He told him, Duke I’m a-coming again/Life is just a wagon train/And I’m glad you’re not a loser like me.” This tune is one of the disc’s highlights, though really the whole show is excellent.

Dave Van Ronk does a really interesting rendition of “Cocaine Blues,” nearly speaking the song, telling the story, and so it feels so very true, so real. He sure had a knack for doing that.  His version includes lines like “Your woman says you ain’t treatin’ her right/Take a snort of coke and turn out the light/Makes you feel like superman…for the first five minutes” and “My mucus membrane is just a memory/Sometimes I think that coke is bad for me/And then I stop thinking.”

The way he tackles the bluesy "Come Back Baby" is completely delicious. I love the way he whispers “I don’t want nobody else but you.” And listen to him really rip into it at the end there. This is another of the many highlights.

And then he gives a little spoken word introduction to "Candy Man" while starting the song. This track is totally delightful. You have to hear what he does vocally on this one, like on lines “Gingerbread man/Santa Claus” and “Peppermint stick/Big brass band.” Yes, it’s silly at times, and wonderful. This is one guaranteed to get you smiling.

"He Was A Friend Of Mine"

I love the straightforward way he approaches “He Was A Friend Of Mine.” I’ve heard a lot of versions of this song over the years, and Dave Van Ronk’s rendition feels so personal (listen to the way he sings, “He died on the road”).

Live In Monterey ends with “Four Strong Winds,” which features a strange and endearing vulnerability in Dave Van Ronk's voice, a quaver that reminds me of Melanie Safka. “But our good times are all gone/And I'm bound for moving on/I’ll look for you if I’m ever back this way.”

Live In Monterey was released on May 13, 2014 through Omnivore Recordings.