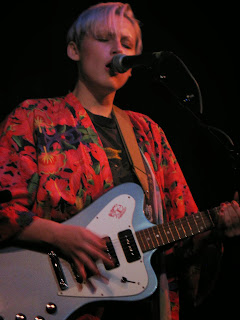 Sarah Jaffe ended her two-week tour last night with an excellent performance at The Hotel Café in Hollywood, California. After a nice opening set by Erin McLaughlin, Sarah Jaffe and her band took the stage – a trio, with Sarah on vocals and electric guitar, Scott Danbom on keys and backing vocals, and Roberto Sanchez on drums. She spent very little time setting up and tuning, and jumped right into her set, skipping any sort of spoken introductions, but rather letting the music itself introduce her to this crowd, letting the music itself make that connection with the audience immediately.

She opened with a relatively new tune, “Defense.” And it is her vocals that first grabbed me. There is something gorgeous about her voice, but with a hard edge, which I like. There is a haunting quality to the tune, due in part to the work on keys.

She followed that with an energetic rock tune, “Ride It Out,” driven by her vocals and guitar. There is even a cool scream at the end of the chorus. It’s easy to lose yourself in her music, and she seemed to do so also, her eyes often closed as she sang.

Sarah checked in with the audience after the second song, making sure everyone was okay. Someone yelled, “You’re really talented,” and she said, “That was a family member, it doesn’t count.” And that is something that might not be immediately apparent to someone listening to her albums. While her music has a very serious sound, she’s actually quite funny. She had the entire audience laughing at several points during her set, like when she talked about getting stuck in Wyoming.

“Vulnerable,” began a cappella, before the beat came in. She sings, “Wake me up just to call me sleeping beauty,” with Scott providing nice backing vocals on that line, their voices blending quite well together. This is one of my favorite tunes of the night. It’s a completely wonderful song. I love the keyboard part.

"Pretender Pt. 1" began with just guitar and vocals – sparse, intimate, and with an openness, a vulnerability that was captivating. She totally held the audience, who were nearly completely quiet. That is something of a feat in Los Angeles, you understand.

Before her last song, she wished folks a merry Christmas and New Year, then said, “I’m being sarcastic, but that’s my sincerity.” She then launched into “Talk,” a good rock tune to close the set. And though the audience called one, she did not do an encore. That is most likely due to the strict time limits of sets at this venue.

Before this show, I’d only heard a couple of tracks. By the end of the first song of the night, I was a fan. By the way, she has her albums available on vinyl as well as CD.

Posted by Michael Doherty at 12:19 PM