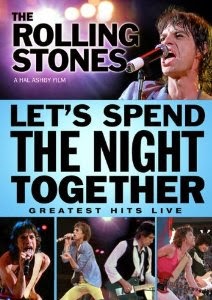 The Rolling Stones were still on top of their game at this point, having just released what I consider to be their last really good record, Tattoo You (they perform several songs from this album in the film). The film features footage from two concerts – at Sun Devil Stadium in Tempe, Arizona, and The Meadowlands Arena in New Jersey.

The film opens with the Rolling Stones heading up onto the stage, putting on their instruments. Then the giant curtain opens, revealing a huge stadium of fans. The reverse shot shows those on the floor surging forward as the band launches into “Under My Thumb.”

With barely a pause, they go into “Let’s Spend The Night Together,” with Mick Jagger dancing all over the large stage with his cordless microphone (which is what I remember him doing in 1989 when I saw the Stones at Sullivan Stadium.) Mick does goof just a bit before “Shattered.” This version of “Shattered” feels a bit too fast, and a bit too full. Mick’s face is wild as he sings, “Look at me.”

There is the briefest of shots backstage before the band goes into “Neighbors,” and then a bit more backstage footage during the song, of the band getting ready, getting made up and so on. I like the saxophone in this version.

During the end of “Black Limousine,” Mick struts up the stage extension, and a Frisbee lands just behind him. Later, he picks it up and throws it into the audience. Mick straps on an electric guitar for “Just My Imagination.” He also plays guitar on “Waiting For A Friend” and a few other songs.

I love the Rolling Stones. They’ve put out so many incredible records. Yet in concert there is something rather dull about them. The music seems rushed, rehearsed, played by the numbers, automatic or even obligatory in some way. Like they were just getting through it. Their concert I saw in 1989 was by far the worst I saw that year. I was thinking that perhaps in 1981 it would have been different. But I guess you have to go further back in time to catch them when they still had a genuine excitement about the music. (I remember buying Still Life, a live album recorded on this tour and released the following year, and being very disappointed by it.)  Perhaps a bit of the rushed feel is due to the editing. The film is a brief eighty-six and a half minutes. Surely the concert was longer than that. We need a bit more of the stage banter between songs.

Still, the songs are all good. And there are many cameras, capturing all sorts of angles. And there are interesting moments, like when Mick climbs down a ladder and runs through the audience (though he has several people with him – in front and behind, sort of pushing the audience aside to make room, which is gross). During “Time Is On My Side,” there are some old photos of the band and some old footage of them. There is also some serious news footage that completely surprised me – including a decapitated head on a stick and self-immolation.

During “Going To A Go-Go” we see, in sped-up footage, the stage being erected, though at another venue, this one an indoor venue, The Meadowlands. It’s pretty awesome footage, and it continues through some of that show. That leads, interestingly, to “You Can Always Get What You Want” performed at that indoor venue. This place has a more intimate feel, which is great. It’s a smaller stage, so Mick is a little more contained, which is better. I love that shot of Keith Richards clowning around during the song.

Mick then introduces the other musicians joining the band, and then the members of the band. That leads to Keith Richards singing lead on “Little T&A.” I am much more engaged by the footage shot at this indoor venue.

During “She’s So Cold” we see footage of the different venues, backstage and on stage.  Mick Jagger plays guitar on “Miss You,” and that tune is one of the film’s highlights. This tune, more than many of the others, has a loose, playful vibe. Mick plays guitar on “Let It Bleed” too, and there is some footage from the other show mixed in during this song.

They follow it with “Start Me Up,” which at that time was on the radio like every thirty minutes, one of the great rock songs of my childhood. “You made a dead man come.” There’s a lot of energy, and the crowd is clearly loving it.

We are back at the large outdoor venue for “Honky Tonk Women.” A bunch of girls are led onto the stage for this song. There’s no point to their being there, they’re not singing backup or anything. It’s crap like that turned me off when I saw them in 1989.

We’re back inside for “Brown Sugar.” “Jumpin’ Jack Flash” and “Satisfaction” finish up the concert film, the latter played as balloons rain down on the audience at the indoor venue.

This is far from being one of Hal Ashby’s great films. But as far as concert films go, it’s not bad. The main interest in it now, obviously, is being able to see the band at that time. But we don’t really learn anything about them, or get to know them at all, even from the backstage footage.

Let's Spend The Night Together was released on DVD on November 2, 2010.
Posted by Michael Doherty at 3:29 PM