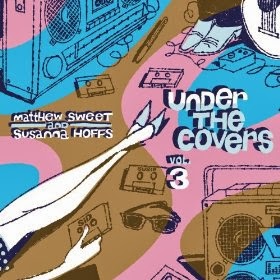 Matthew Sweet and Susanna Hoffs released the third volume in their Under The Covers series. This volume is all about the eighties, which of course was the last great decade for pop music. Well, really, it was mainly the first half of that decade that was great. The second half of the 1980s was a mixed bag, with some great stuff from bands like R.E.M. and ‘Til Tuesday, but also a lot of complete horseshit from bands like Cinderella, Europe and Poison.

Matthew Sweet and Susanna Hoffs make some interesting selections on Under The Covers Vol. 3. Some of these tunes were big hits, such as “Our Lips Are Sealed” and “Free Fallin,’” while others are less well known, such as “The Bulrushes.” Most of these tracks are light, fun pop tunes. By the way, this CD’s liner notes feature some silly photographs of Sweet and Hoffs.

They open the disc with an R.E.M. tune, “Sitting Still” (from their 1983 album, Murmur). It’s a fun rendition, and Matthew Sweet does just a bit of a Michael Stipe impression in his vocal approach. They follow that with “Girls Talk,” a song written by Elvis Costello and recorded by Dave Edmunds, who had a hit with it. Susanna Hoffs takes lead vocal duties on this track. This is another bright, fun pop tune.

I’ve been enjoying listening to the dBs lately, and on this disc they cover that band’s “Big Brown Eyes.” It’s a good tune, though at less than two minutes, it’s over so quickly (the original version was short too).

Chrissie Hynde is one of those fantastic kick-ass gals of rock, and Susanna Hoffs does a bit of a vocal imitation of her on this cover of The Pretenders tune, “Kid.” I also really dig the way Susanna handles the vocals on Kirsty MacColl’s “They Don’t Know.”  “Our Lips Are Sealed” was always one of my favorite Go-Go’s songs, and Susanna adds a rawness, a rough edge to her vocals, which is nice.

Their version of “Free Fallin’” is kind of smooth, but it just doesn’t have the energy and power of the original Tom Petty version. This is one of the weakest tracks. But I love their version of “Save It For Later,” which captures the fun spirit of the original. I’ve always really liked XTC, and these guys do a good job with “Towers Of London,” totally getting the energy of the tune.

Under The Covers Vol. 3 was released on November 12, 2013 through Shout! Factory.

(Note: I also posted this review on Pop Culture Beast.)

Posted by Michael Doherty at 4:31 PM