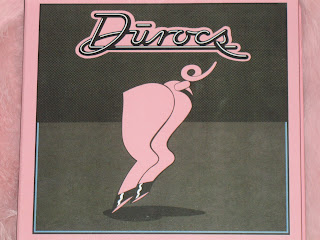 Durocs are two musicians: Ron Nagle and Scott Mathews. They're probably more well known for their songwriting. They wrote The Tubes' "Pound Of Flesh" from Now (Ron Nagle also co-wrote that group's "Don't Touch Me There"). They wrote "Don't Believe What You Read" with Barbra Streisand.  Ron Nagle was also a member of the San Francisco band Mystery Trend in the 1960s (and did sound effects for The Exorcist, and later for Cat People).  Scott Mathews was in a band called Ice with Steve Perry (yes, the guy who would go on to sing in Journey).

But they also put out an album together under the name Durocs. Durocs' self-titled album, originally released in 1979, features mostly original songs (with one exception).

They're best when they're being fun and a bit silly, in songs like "We Go Good Together" and "Seeker (You Be Sucker)." The band is less effective on slower, more serious tunes like "Don't Let The Dream Die" and "One Day At A Time," which are cheesy and really feel like products of their time. It's hard to connect to those songs.  But on the funnier material, they really shine, and the album succeeds based on those songs.

The CD kicks off with "Hog Wild," a ridiculously happy power-pop track. It has quite a full, dense feel for the work (essentially) of two guys. This is sort of the band's title track, for the name of the band is mentioned in the lyric: "We got the Duroc stance." So perhaps it's a sort of anthem for the band.  By the way, Duroc is a breed of pig. Steve Douglas plays saxophone on this track.

The song's use of the phrase "take it to the max" really brings me back to my childhood.

"We Go Good Together"

"We Go Good Together" is a track that really works because it's sillier. This is when these guys are most effective, with lines like "The same as bread and butter/Bum and gutter" and "The same as ropes and whips/Fish and chips, black and pink."  (Black and pink worked so well in the late seventies and through much of the eighties, and I think still are great - they're also the colors of the album's cover.)  This one also features Steve Douglas on saxophone.  "We Go Good Together" is totally catchy and fun.

"No Fool No Fun" is an interesting song about a guy who becomes a jerk when he drinks. It sounds like it would be heavy, but it's actually a fun track, with some vocal effects that remind me a bit of Electric Light Orchestra.  Here is a taste of the lyrics: "But it's Jekyll and Hyde when you give him a drink/Instant reaction from a sociable nip/Turns a man into a monster when he takes his first sip."

"It Hurts To Be In Love"

"It Hurts To Be In Love" is the album's sole cover. Gene Pitney had a hit with it in 1964. Durocs give us a lively, somewhat goofy late-1970s version of the song written by Howard Greenfield and Helen Miller.  This version has Steve Douglas on saxophone, and Larry Reed on backing vocals.

"Seeker (You Be Sucker)"

"Seeker (You Be Sucker)" is another fun one, which reminds me a bit of Devo at first. It takes jabs at some of the indulgent self-help trends and fads of the 1970s, which is wonderful. It starts with these lines: "So you thought you found an answer in your TM/You graduated self-assured from EST/You donate all your money to the reverend/Support the movement, get it off your chest."  Plus, it's fun to dance to. This is my favorite track.

"Saving It All Up For Larry"

The original album's final track, "Saving It All Up For Larry," begins as a '70s rock tune with a hard, steady beat. This is a song in which the singer tries to convince a girl to cheat on her man. But, in spite of the great ego of the singer ("Other girls would die for your chance"), she is saving it all for Larry.

"Saving It All Up For Larry" is kind of silly, particularly in the higher range vocals for the woman's part ("Oh no, I'm saving it all up for Larry/He's the kind of guy/Every girl in the world would want to marry").

This special re-issue contains eight bonus tracks.  The first, "Pete Has Got The Power," is a somewhat goofy, somewhat cheesy song about a guy who has the power to get and control a girl young enough to be his daughter.

"There's Always You" becomes interesting nearly three minutes in when it picks up in pace. The instrumental section is wonderful, especially with the saxophone. One thing to note: the CD track list on the back reverses the order of two songs. "There's Always You" actually comes before "Stranger On The Street."

The best of the bonus tracks is "Drinkin' One Day At A Time," a country song, which itself is a surprise, with acoustic guitar and pedal steel. And the bigger surprise is that it really works. Here is a bit of the lyrics: "Don't look at me like I've got some disease/I won't stay here forever/Just till she's off my mind/I'm drinkin' one day at a time." I completely love this song; it's one of my favorites from this CD.

CD Track List
This special re-issue of Durocs was released on May 22, 2012 through Real Gone Music.

Posted by Michael Doherty at 2:36 PM