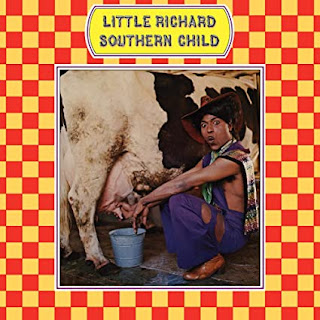 On The Rill Thing, which was released in 1970, Little Richard covered “Lovesick Blues,” a song made famous by Hank Williams. And then on his next album, 1971’s King Of Rock And Roll, he covered Hank Williams’ “I’m So Lonesome I Could Cry,” as well as another song that Hank Williams recorded, “Settin’ The Woods On Fire.” Yup, Little Richard, the self-proclaimed king of rock and roll, was doing country, and he was doing it really well. So what was his next album? Well, it was going to be Southern Child, an album of country rock, which he recorded and for which the cover photo was shot. But that record was shelved, and instead The Second Coming was released. The songs from Southern Child were eventually released in 2005 as part of the three-disc set, King Of Rock And Roll: The Complete Reprise Recordings. But it wasn’t until just a few weeks ago that the album was finally released on its own as Little Richard had intended, with the proper photo on its cover and everything (yes, that insane shot of him milking a cow). It was released on yellow vinyl as part of Black Friday’s Record Store Day, and then on CD the following week, the CD containing a few bonus tracks.

The album opens with “California (I’m Comin’),” a totally delicious country rock song that was written by Little Richard, Randy Ostin and Keith Winslow. Oh yeah, I should mention that not only did Little Richard record an entire country rock album, but that he wrote or co-wrote all the tracks. Yeah, this is all original material. Crazy, right? Well, it’s also really good. This lead track is totally delicious and catchy. It is country rock, yes, but with a certain amount of funkiness. “I hope you receive me well/I got a story that I got to tell/You’ve got to be good to me, California/I’ll be good to you.” That is followed by “If You Pick Her Too Hard (She Comes Out Of Tune),” a strangely gentle and sweet country number that works its way into your heart before very long. There is something delightful about this track, right from the start with that wonderfully odd vocal part, which is revisited near the end.

“Burning Up With Love” is a cool combination of country and funk, in which Little Richard’s vocal delivery is somewhat restrained, at least for the most part. In this song, he seems to be burning both metaphorically and literally. He sings, “I’m stuck in a burning building/Flames licking by my toes/It wouldn’t be as bad as being without you,” and then, “Because I’m burning up with love for you.” Little Richard gets more seriously and deeply into country territory with “Ain’t No Tellin’” and it works so damn well. Seriously, this is one of my favorite tracks from this album. Little Richard totally nails it, and seems to feel no need to sell it; he gives us a wonderful vocal performance without any shouts or wild whoops. And he maintains this vibe for what is one of the album’s longest songs, at nearly six minutes. That’s followed by “Last Year’s Race Horse (Can’t Run In This Year’s Race),” which has an intriguing beginning, Little Richard’s vocals supported by just some unusual work on guitar. “Run, run/Keep on a-running.” Then the music has a somewhat laid-back and loose vibe, somewhat in contrast to Little Richard’s powerful vocal delivery, creating an interesting sound overall. And I love that guitar work.

The album’s title track, “Southern Child,” is a fun number in which he sings about being born in Macon, Georgia, and lets a little of his enormous ego into the lyrics, assuming everyone knows details about his youth: “Now I’m a southern child, a southern child/From down in Macon, Georgia/Everybody knows where I was born/Now I’ve been seeking, searching, lordy, lordy/Trying to find my baby/I’m trying to bring my baby back on home.” There is something completely delightful about this track. It is sweet and fun and catchy, and moves just right. This is another of my favorite tracks. That’s followed by “In The Name,” a song he had also included on King Of Rock And Roll. The version here is quite a bit different from that rendition, that one a great soul number with gospel backing vocals. This version might be Southern Child’s sweetest track, a gentle, laid-back number that is several shades of wonderful. “I’ve been gone for such a mighty long time/And I just can’t get you out of my mind.” And some lines are delivered almost as spoken word. Yeah, this track is excellent.

Little Richard then gives us a song titled “Over Yonder,” a wonderful gospel country track that includes a spoken word section in which he delivers a message about people coming together. And listen to that harmonica. That’s followed by “I Git A Little Lonely,” a song that is country, but feels like some kind of funky rock is trying to burst out from below. The results are totally cool. This one is less than two minutes long and comes to a sudden ending, but it is followed by the album’s longest track, “Puppy Dog Song,” which features the sounds of dogs barking at the beginning. And Little Richard, in a spoken word section, talks about the dogs, and when he mentions the white dog pushing the other dogs out of the way, I can’t help but think of that bully Trump pushing other world leaders out of the way so he can be in the center. This song, which is funk, finds Little Richard riffing vocally over a good groove, and over the barking dogs. Then like four and a half minutes into it, he starts singing. Singing and shouting and belting out the lines. “Now the dog catcher is on the way-ay-ay-ay-ay.” This wild song is how the album concludes.

The CD version of this album contains four bonus tracks, the first three being takes of “In The Name.” The first begins with some studio banter, and has a false start. The other two takes are complete takes, both being just vocals and acoustic guitar. It is so cool to hear Little Richard presented this way. These tracks have such a loose, honest vibe, and are playful at times. At the end of the second track, he says “I think I should go to a higher key,” and indeed in the third take he does just that. The final bonus track is “Sneak The Freak,” which is a fun rock and roll instrumental number, featuring some great stuff on piano.

Southern Child was released on CD on December 4, 2020 through Omnivore Recordings.

Posted by Michael Doherty at 8:41 AM