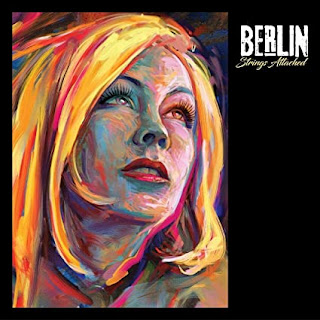 Berlin formed in the late 1970s, and had a string of hits in the 1980s, including “The Metro,” “No More Words” and “Take My Breath Away,” that last one featured in the film Top Gun. The band broke up in the late 1980s, and a decade later reformed with new members. Then more recently, the founding members reunited for the album Transcendance. Now the band is revisiting some of its best material, but with a very different approach. As the album title Strings Attached suggests, this time the band is backed by an orchestra. Two, actually. Both The City Of Prague Philharmonic Orchestra and The Slovenian Symphonic Film Orchestra join the new wave band on this release.

Strings Attached opens with a short instrumental track, “Take Your Turn,” composed by John Crawford, who wrote most of the band’s 1980s material. This is an orchestral piece that functions as an introduction to the album. That’s followed by one of the band’s most popular songs, “The Metro,” which was originally released as a single in 1981 and then included on the band’s excellent 1982 album Pleasure Victim. This new version has a brief and exciting introduction on strings before getting into that familiar rhythm. The strings work so well here, feeling like an inherent part of the song, blending with the synths. This is a powerful rendition, and it is followed by another of the band’s big hits, “No More Words,” this one too featuring a new instrumental introduction on strings, which is actually rather beautiful, creating a different mood. Then that pop beat comes in under the strings, and soon that pop sense takes over, a fantastic moment. I absolutely love the way this song comes together in this version. And Terri Nunn’s vocal performance is excellent and lively. Listen to the attitude in her delivery of a line like “You can leave right now if you’re feeling doubt.” This, for me, is one of the album’s highlights. This song was originally included on the 1984 LP Love Life.

It is no surprise that “Take My Breath Away” works perfectly in this orchestral context, the beauty of the song increased by the strings. This song was written by Giorgio Moroder and Tom Whitlock for Top Gun, and was included on the soundtrack to that film, as well as on Berlin’s 1986 LP Count Three & Pray. And, seriously, how sexy is Terri Nunn in the video for this song? I was far from alone in having something of a crush on her. Then “Masquerade” begins here essentially as it does on Pleasure Victim, with that electronic rhythm. The strings have a bright presence, no question, but do not much alter the general feel of the song. That’s followed by “Now It’s My Turn,” a song from Love Life, and one that was also released as a single. This new version of “Now It’s My Turn” includes a dramatic instrumental introduction before the beat takes over, and has a stronger sense of excitement about it, both in the instrumentation and in Terri Nunn’s vocal approach. That spoken word section halfway through works better here than in the original version.

“Sex (I’m A…)” is the song that cemented my interest in Berlin back when I was a kid. I might have heard “The Metro” before that, but this song is what got me really excited. It was written by John Crawford, Terri Nunn and David Diamond, and was released as a single, and also included on Pleasure Victim.  On this new version, there is the briefest of instrumental introductions before that whisper of “Sex,” and then that strong pulse comes in. The strings add another layer to this song, an interesting texture and beauty. Both Terri Nunn and John Crawford are clearly having a good time with this song, and the results are wonderful. And when she sings, “I’m a goddess,” who are we mere mortals to disagree? That’s followed by “On My Knees,” a song that was included on Transcendance, an album that was released just last year. It’s a gorgeous song, and the orchestral treatment works particularly well here. Terri’s vocal performance retains that delicious intimacy at the beginning, and the piece grows from there. “In this home we built for years/The beauty and the pain/Shared our love, shared our name/All our hopes and our fears/Now a home without you here/Is so terrifying/But this highway of tears isn’t ours/Now I’m on my knees/Darlin’ please/It’s time to die.”

This album’s last four tracks are all songs that were originally included on Count Three & Pray. The first, “Like Flames,” was also released as a single. This version has an instrumental introduction that feels like a piece from a film, then it develops into a powerful and rousing number, another of the disc’s highlights. That’s followed by “Will I Ever Understand You,” the lead track from Count Three & Pray, this version beginning much the way that original version does. The power behind Terri Nunn’s vocals is remarkable. As with the original version, there is a short drum solo in the second half. On Count Three & Pray, “Will I Ever Understand You” is followed by “You Don’t Know,” and it is likewise followed by that song on this new album. The instrumental opening in this rendition has a bit of a magical sense to it. As on the original, the beat emerges from it, but the track retains a haunting feel. And as on the original, the last lines are performed a cappella. This disc concludes with “Hideaway,” one of my personal favorites from Count Three & Pray. This new version is excellent. There is a section with just strings in the second half that is beautiful.

Strings Attached was released on November 27, 2020.

Posted by Michael Doherty at 9:42 AM