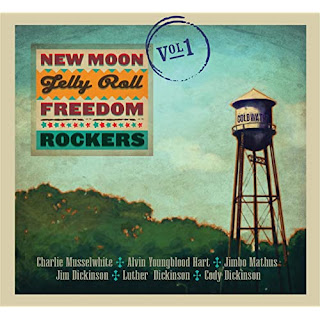 Now that the ugly orange cloud is lifting from our nation, the blues sound different, don’t they? I mean, take Volume 1, the first album from New Moon Jelly Roll Freedom Rockers, for example. The first track sounds like some kind of celebration to me. Is it just me? I don’t think so. We’ve all had the blues for four years, four years that felt like forty years, and the music had a certain weight, just as everything did. Now our ears are ready to hear things differently. Our hearts can accept joy again. This group might not be familiar to you, but its members certainly are. The band is made up of Charlie Musselwhite on harmonica and vocals; Alvin Youngblood Hart on guitar, mandolin and vocals; Jimbo Mathus on guitar and vocals; Jim Dickinson on piano and vocals; Luther Dickinson on guitar, mandolin, bass and vocals; Cody Dickinson on drums, washboard and vocals; Chris Chew on bass; and Paul Taylor on tub bass. Now that is a band! The music here was recorded back in 2007, but not released until now. It was recorded in a relaxed style, apparently with the musicians all in a circle, taking turns leading the others. Clearly, these folks were having a good time, and the music has a lighthearted, joyful sound as a result. It may have been recorded more than a decade ago, but it feels exactly right for our time now.

The album opens with Charlie Musselwhite’s “Blues, Why Do You Worry Me?,” here listed as “Blues, Why You Worry Me?” From the moment it begins with that great work on harmonica, this song is a joy. It’s got a good beat, some delicious guitar work, and a vocal performance that has a cool and friendly tone. “I used to drink to keep from worrying/Now I ride from town to town/Don’t the highway look lonesome/When the sun is sinking down.” And the musicians jam on this track, opening it up and adding to that joyful sense. That’s followed by a cover of “Pony Blues.” There is more of a back porch vibe at the start of this one, which I love, and the track maintains a great loose vibe, particularly through that percussion. It feels like any of us could join in if we wished. Just grab something to bang on and bang away with joy and abandon. And really, that’s the feeling now, isn’t it? Let’s join together and let joyous music fill the air, for tyranny and racism and stupidity have been voted out of the White House.

Jimbo Mathus then leads on “Night Time,” which he wrote. This one establishes a seriously cool vibe and sound. Yes, it sounds like how you want the night to sound, how you imagine it sounds when maybe you’ve had a few drinks and feel you’re looking your best as you walk the city streets. That’s followed by “Come On Down To My House,” a track that is fun from the moment it begins. I can’t help but smile while listening to it. It also seems to invite us to join in, to sing along. There is certainly something of a party atmosphere here, even if the party is small. “Come on down to my house/Nobody home but me/Come on down to my house/And keep me company.” There is a bit of banter at the end, adding to the loose vibe of the recording. We then get a nice, relaxed rendition of “K.C. Moan,” with more good work on harmonica. This is just so damn good. There is a bit of banter at the end of this one as well.

“Let’s Work Together” comes pounding in beautifully, and the energy is just exactly right for the moment, lifting us up, making us feel that everything is possible. And, yes, things are possible again. Isn’t it great to be getting rid of that mendacious prick and his entire awful family? It is like we have a renewed vigor, a renewed joy, a renewed power. Just think of everything that is going to be accomplished now that we don’t have to spend all our days watching the news, worried about what that imbecile is going to do next. “Come on now, people, let’s get on the ball/Let’s work together/Come on, come on, let’s work together/Now, now, people/Because together we will stand/Every boy, girl, woman and man.” That’s followed by Charlie Musselwhite’s “Strange Land,” in which he sings, “Nobody knows me, nobody knows me, nobody knows who I am/Well, I‘m just a stranger in a strange land.” No, this song has nothing to do with the Robert Heinlein novel, but it is making me think I should revisit that book. I remember really loving it when I was in my teens. Anyway, this is a groovy blues number that features some great work on guitar, and is a seriously enjoyable jam, that drum beat keeping things moving like a train. I love when this group stretches out like this.

“Shake It And Break It” is another delight, and again, it feels like we are celebrating. A sort of timeless celebration, cheering on everything that is good about life. Yes, it is time to dance again. And everything about this track is fun. Things then get a bit more rowdy with a cover of Jimi Hendrix’s “Stone Free,” and I’m digging this too. It’s been a while since I’ve listened to this song, and perhaps I had forgotten how damn good it is. Well, this rendition is a great reminder, featuring some more excellent work on harmonica. This wonderful album concludes with “Stop And Listen Blues,” which begins with a good instrumental section and features some nice percussion.

Volume 1 was released on September 4, 2020 on Stony Plain Records. I am looking forward to Volume 2, which will be released in the spring.

Posted by Michael Doherty at 10:43 AM