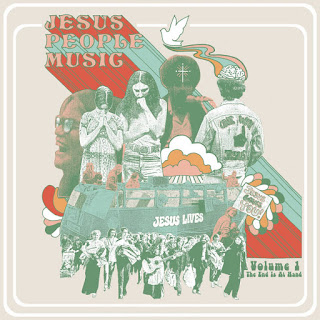 I love music from the late 1960s and early 1970s, and in particular the more psychedelic-sounding recordings of that period. It was certainly a period of exploration, inside and outside of music. Some of that exploration understandably turned to the spiritual realm, and the Jesus Freaks were born. Or born again, I should say. And some of those Jesus Freaks had bands. Doors were being blown open at the time, and everything was worth looking into and checking out. For who knew where the answers would come from? Even the Grateful Dead sang “I love you, oh, but Jesus loves you the best” on their 1969 album Live Dead.  Jesus People Music Volume 1: The End Is At Hand is a compilation of music from that time, from artists you might not be familiar with. The music has that delicious psychedelic rock sound, with folk elements as well. You certainly don’t have to be a believer to dig these tracks. I love that this first volume is called The End Is At Hand. Let’s start at the end. Why not? This compilation is being released on beautiful translucent aquamarine vinyl, as part of Black Friday Record Store Day.

The album opens with “Creation, Lord I Saw You Cry,” a song from a band called Azitis. This psychedelic number eases in and begins to build. Then suddenly it breaks into more of a folk rock style, and features some nice vocal work. “And the sun had yet to come/And the storming gave no warning/Darkness fell on everyone.” In the middle of the track, the band delivers a good, but short jam. There is something loose, and yet kind of beautiful about this track. It was the lead track from the band’s 1971 LP Help, and is a great choice to begin this compilation. That’s followed by Frank Starr’s “Jesus.” This one comes on stronger, with a good, wild beat. This song basically calls out to Jesus, and Frank Starr stretches out his name, holding onto it, and you feel like Jesus himself might come down to join in the dance, to bless the music and the band. The band, by the way, is The Wilson-McKinley Jesus Rock Band. And the next track is from the Wilson McKinley album Heaven’s Gonna Be A Blast! “Almighty God” is the closing track from that album, and is a mellower psychedelic number, a song that makes me want to get really high. You’ll know what I’m talking about when you hear it. It features some excellent vocal work, a cool bass line, and some interesting stuff on guitar, and is certainly a highlight of the album.

“Deeper Than The Mighty Rolling Sea” is one that will get you dancing barefoot in a park with arms reaching up to the heavens, or perhaps just out to the nearest good-looking reveler, whichever you prefer. This is by a group called Maranatha, and it was included on their 1971 album Soon. By the way, the opening track from that LP, “Do You Know My Jesus,” includes the lines “I’m a fool for Jesus/Whose fool are you,” which made me smile. Oh, one other note about that album: On it, there is a song titled “Maranatha,” which puts this band on that list of bands that have a song sharing the band’s name, along with groups like Black Sabbath, They Might Be Giants, Bullied By Strings and I See Hawks In L.A.  Anyway, “Deeper Than The Mighty Rolling Sea” is a seriously enjoyable song. If this kind of music had been playing at the church I attended in my youth, I might have stuck with religion a little longer. This music really feels like a celebration, like a party. Then U.S. Apple Corps delivers a powerful, heavy rendition of “Will The Circle Be Unbroken,” a track from the band’s 1970 self-titled debut. This is a wild and exciting rendition. The first side wraps up with a pretty and sweet number, Bob Desper’s “The World Is Crying Out For Love,” which was released on a single in 1972. This song has a dreamlike quality, and it feels right for our depressing and divisive time. The world could certainly use a strong dose of love right now, heavenly or earthly, we’ll take whatever you’ve got.

The second side opens with Pitch & Spice’s “Hallelujah,” which begins with some passionate, groovy drumming. It is a rousing rock song, and those “Hallelujah” backing vocals have a gorgeous gospel sound. This is a live track, and has a great raw and spontaneous feel. It’s followed by “Walk On The Water,” which has a heavier sound, more of an early hard rock thing, especially that guitar work. The vocals have a raw sound, like the man has been shouting the good word over blaring guitars for some time. This band jams here, and this track has a lot of energy. It was recorded in 1972, but not released until 1993 on The Celebration Club Session. Then Earthen Vessel’s “Life Everlasting” surprised me, with that great, powerful voice suddenly coming in. Is Sharon Keel’s voice reaching up to heaven, or coming down to us from some mountain? I’m not sure, but the vocal work here is captivating, and this song has its own peaks and valleys, taking us on a journey. “Now that I know him, I have joy/Now that I follow his road/I only wish that you knew him too.” Man, I think that voice could convince me of anything, so full of passion it is, and so certain of its message. This song was written by Sharon Keel and John Sprunger, and is one of my personal favorites.

“The Right Way,” by a group called The Messengers, has more of a folk rock sound. “What have I done to deserve all this/I hated god so selfishly/But praise the lord, he still loved me.” This song was originally included on the 1971 album Born Again, which featured both The Messengers and Good News (each band had a side). These guys jam on this song. That’s followed by Jim Valley’s “All Is Well,” which begins gently on guitar, and features a kind, friendly, and really good vocal performance, that voice then at times building in power. This song, which is from Jim Valley’s 1971 album Family, contains what I assume is a reference to the war in Vietnam: “Baby’s crying/Somewhere there’s young men dying, lord/But there’s a peace I feel/And I know his love is real.”  This excellent compilation concludes with “Into The Light,” the title track from Rebirth’s 1970 album. This is an interesting and exciting song, going through a few changes before the vocals come in. This is a delicious track featuring some good vocal work, particularly on the line “Out of the night and into the light of Jesus.” There is joy and power behind those vocals.

Jesus People Music Volume 1: The End Is At Hand is scheduled to be released on November 27, 2020 through Org Music, as part of the Black Friday Record Store Day celebration. It is limited to either 1,000 copies (as indicated on the sticker on the shrink wrap) or 1,200 copies (as listed on the official Record Store Day website). 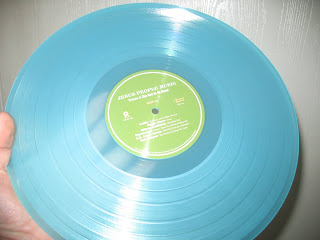 Posted by Michael Doherty at 11:51 AM