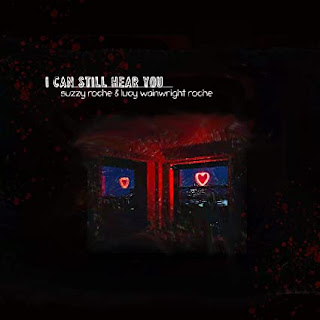 Some families seem to have an inordinate, even ridiculous, amount of musical talent. Such is the case with Suzzy Roche and her family. Suzzy and her sisters Maggie and Terre were a group called The Roches, known for their harmonies and original material. And with Loudon Wainwright III, Suzzy Roche has a daughter, Lucy Wainwright Roche, who of course also is a talented singer and songwriter. Together Suzzy Roche and Lucy Wainwright Roche have released a couple of albums, Fairytale And Myth in 2013 and Mud & Apples in 2016. Now they’re following those with I Can Still Hear You, which features mostly original material, beautiful songs that speak strongly to us in these difficult and ugly times. Joining them on this release is Jordan Hamlin, who plays piano, drums, percussion, guitar, bass, French horn, trumpet, banjo, cello, Mellotron, hammer dulcimer and accordion. Holy holy, what instrument doesn’t she play? She also produced and recorded the album. There are also special guests on certain tracks, including The Indigo Girls (Amy Ray and Emily Saliers).

The album opens with its title track, “I Can Still Hear You,” which was written by Lucy Wainwright Roche. This song features some absolutely beautiful vocal work. In these troubling and stressful times, this song reaches out a comforting hand, telling us we are not alone, that we are not forgotten. And in this time of isolation, this is a message we are hungry for. “From all of the people below and above/To all of the things we need to be careful of/From that was a near miss/To where do I sign this/I can still hear you.” That’s followed by “Ruins,” written by Suzzy Roche. This song too has its own particular beauty, in large part because of the vocal work, which is both friendly and ethereal. Amy Ray and Emily Saliers join them on vocals for this track. This is a song of childhood and the mindless destruction that sometimes goes along with it. “I asked my mama yesterday/I asked my daddy too/Why’s a human heart so mean/To do the things that we do.” This child then adds innocently, honestly “I don’t want to ruin anything.” In these days when we see the horror that adult human hearts are inexplicably capable of, it works to look back at the childhood roots of such troubles. It isn’t difficult to imagine the current Republican senators stomping on flowers as children, or even now as adults.

The album’s first cover is a really good rendition of Connie Converse’s “Talkin’ Like You (Two Tall Mountains).” This is an intriguing song, as it seems both playful, almost like a children’s song, and strangely haunting, addressing loneliness. Have you been thinking of mortality lately, or is it just me? It seems the larger questions are forcing their way into our thoughts these days, and the idea of a soul and what it means play a part in the way we are handling the current troubles. And so a song like “I Think I Am A Soul” is quite meaningful and striking. Written by Suzzy Roche, it features lines like “I think I am a soul/Who knows?/I heard that souls can roam the universe/The soul that I am, well, it could’ve been worse/The soul that I am gets lonesome like a million others.” Yes, in this time of isolation, this track too mentions loneliness. Emily Saliers plays guitar on this track. That’s followed by “Duck Song,” also written by Suzzy Roche. This one has something of the feeling of a traditional folk song, though an odd one. It is written as “Swan Song,” with the word “Swan” crossed out, and “Duck” in its place. The line that really stands out for me is its final line, “My strange new heart didn’t even recognize its beat.” Scott Mulvahill is on bass, and Brian Griffin is on drums.

“Factory Girl” is a traditional Irish song that The Roches covered on their second album, Nurds, back in 1980. Now Suzzy is revisiting it with her daughter, delivering a pretty rendition that also has a power, in that percussion as well as the vocal performances. The Indigo Girls join them on this track, Amy Ray on vocals and Emily Saliers on guitar. Perhaps the album’s best track is the gorgeous “Get The Better,” written by Lucy Wainwright Roche and Suzzy Roche, a song of a damaged angel. Check out these lines: “I’m broken in a couple ways/Lost my old halo and all the golden strands/Careful where you dream these days.” Something about this song, its sound, brings me to the edge of tears every time I listen to it. That’s followed by “Little,” a song inspired by E.B. White’s Stuart Little, about seeing things from a child’s perspective, which can be frightening, feeling small and inconsequential. “Life ain’t nothing but a tragic surprise/A whole lot of nothing for a mouse your size/Saw my shadow, mighty tall/Won’t amount to much at all.” This one was written by Suzzy Roche.

“Joseph D” is an interesting and unusual number about a miserable man. This one kind of sneaked up on me and surprised me with lines like “Baby wants his lollipop/Hates his own guts/Begging on his broken knees/For some god to shut him up.” That’s followed by “Jane,” a song written by Maggie Roche, but one which she apparently never recorded. Maggie died in 2017. “There’s blood on the bed from the night when she said who she was/And I put on a song I thought I could put her in/But she isn’t there.” The album concludes with a cover of “Bein’ Green,” written by Joe Raposo and originally sung by Kermit The Frog, a song that certainly strikes a chord these days. Suzzy Roche and Lucy Wainwright Roche deliver a sweet and beautiful and gentle and hopeful rendition.

I Can Still Hear You is scheduled to be released on October 30, 2020 on Storysound Records.

Posted by Michael Doherty at 12:54 PM