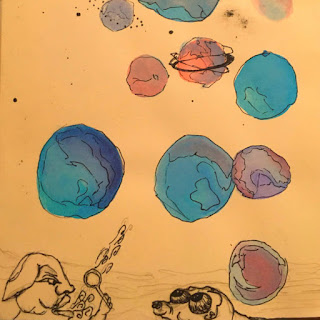 There is a line in the first track of the new Dan Friese CD that jumps out at me: “This whole damn world/Has gone insane.” That perfectly describes the outlook many of us have these days. The last four years we’ve seen people’s worst qualities encouraged, even celebrated by an administration that is devoid of compassion and warmth, that is selfish and soulless. The country has embraced lesser goals and attributes, and is all but unrecognizable. As Dan Friese sings on that opening track, “We gauge our worth/On what we’ve gained.” With the election at hand, we are fearful that our nation may continue along this twisted path, but music has helped us maintain at least a portion of our sanity, our humanity. Dan Friese’s Jane Songs, his first full-length release, is a good companion on this journey, offering reminders of what really is important and how brief this whole thing is. Following his debut EP, Happiness, which came out earlier this year, Jane Songs features all original material, written by Dan Friese. Joining him on this release are Eric Carne on drums, Bill Bambach on bass, and Irina Markevich on violin.

That opening track, “Start Breathing In,” begins almost gently, the harmonica having a somewhat mournful sound. It isn’t long before the song kicks in, taking on something of a rock vibe, and then it isn’t about to hold back, the first lines being “Some hardened hearts/They can’t be saved.” It is a song about priorities, and offers a little advice, “Start breathing in/Or your soul’s gonna suffocate.” “Start breathing in” is good advice, unless of course you’re around someone who isn’t wearing a mask. “Start Breathing In” is followed by “I Can’t Say,” which has a kind of loose folk rock vibe and sound, with a bluesy edge to some of the guitar work. And there is an edge to the vocal performance as well. Check out these lines: “Whoa, I don’t know/What’s on your mind, what’s in your soul/Hey, hey, I can’t say/That I’d wanna know that anyway.”

One of my favorite tracks is “I Thought I Knew,” in large part because of the lyrics, which I think most folks are going to appreciate. “Well, life’s much harder/Than it is in your mind/When your thoughts are all rosy/And everyone’s kind/Reality, it gets you every time.” And there is a great ache in his delivery, an ache that seems to come from experience. Adding to the great appeal of this track is the presence of violin, some beautiful work by Irina Markevich. There is also a positive, hopeful note in lines like “I won’t let my fears imprison me/I won’t let my nervous heart/Be my demise,” and “I’m going to be what I want to be/And you can be whatever you like,” which are repeated at the end. Dan Friese then gets a little bluesy at the beginning of “Streetlight.” This one was released as a single, and it too offers a sense of hope, something I am eager to latch onto. “Don’t need to worry no more/Don’t need to waste any more time.” I also like that bass line. This is a beautiful song with a sweet and gentle vibe, and an earnest and moving vocal performance, another of the disc’s highlights.

“Inner Child” eases in with some good work on guitar. When it kicks in, this track has is something of an acoustic rock vibe. I dig that work on harmonica, but these lines are what really stand out for me: “I stuffed my inner child/Into a holding cell/He released himself/Now everybody thinks I’m slippin’ away.” That’s followed by “Open,” which features a pretty instrumental section that feels warm, like something you can wrap around yourself as you drift off. On this track, Dan Friese uses a marimba plugin to add to the appealing sound. Then some beautiful and somewhat dark work on piano opens “The Beginning.” It has a haunting and somber sound. Nearly halfway through, the guitar comes in, adding another layer to this interesting instrumental track. That’s followed by “The Call,” which also has a dark vibe about it, with something of a raw sound that works well with its lyrics and subject. Check out these lines: “Tie this noose up tighter/‘Til I fall/All my yesterdays/Are filled up with your name/I didn’t know what I needed/Even when it came.”

“Stop Bringing Everybody Down” is a powerful and engaging song with an unusual rhythm and some more beautiful work on violin. It also features some excellent lyrics, such as these lines: “Don’t let it float on past/We’re alive for just a minute/Then it’s back to the ash/Your soul’s on fire/Your righteous path/It might be well-intentioned/But it’s making a mess.” And when you hear the line “You keep bringing everybody down,” who is it that comes to mind? The album concludes with “This Life,” a song about the ups and downs of life, which can feel pretty damn extreme at times. Yet the track has a pretty and comforting sound from its start. In its first line, he tells us “This life is perfect” and I want so much to believe him, but he quickly follows it with “And then it’s hell.” I love the honesty of lines like “How I’ll feel tomorrow/I can’t tell.” This track features some gorgeous and moving work on violin. And here are some lines to take with us into the coming days: “And when this life gets hard/I won't let it fall apart/I won't be so faint of heart/I'll find some joy in the pain.”