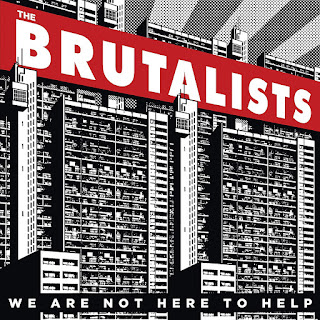 I’m certain I’m not the only one who is turning to music to help ease the pain of living in a time when a total scum-sucking soulless scoundrel like Donald Trump can become president of the country. Something went so completely wrong in 2016 that it shifted our entire reality toward a dark and terrible place, and there are times when it feels like we are stuck here, that the worst humanity has to offer has triumphed. The Brutalists’ fantastic new album, We Are Not Here To Help, despite its title, is seriously helping me cope, helping me feel that some people are still thinking, are still feeling, are still ticking and still kicking. This L.A.-based band is composed of Mick Cripps (from L.A. Guns) on guitar, keys, bass, melodica and backing vocals; Nigel Mogg (from The Quireboys) on lead vocals; Kent Holmes on guitar, keys, bass and vocals; and Charlie Nice on drums, percussion and backing vocals. And the music they create is part punk, part garage rock, part pop, part reggae, and completely fucking good. The new album, the band’s second, features all original material.

It gets off to a great start with “Leave It Out,” some damn good garage rock and roll, with a catchy groove and a ton of energy. There is a bit of pop to it, and some punk, particularly in the vocal delivery. “She took my records and my money too/And left me wondering what to do.” That’s followed by “If I Just Do Nothing,” and immediately this song’s bass line grabs me. Seriously, this is good. Turn it up and let loose. We need to do that, especially these days when we are all wound so tightly we feel like we’re going to explode at any moment. “If I don’t do something soon, then I’ll never do anything again/What’s the point of being here/You’ve got nothing new/What’s the point of anything/When you don’t even want to see it through.” There is raw power, but just enough pop polish to get everyone dancing and moving. This is one of my favorite tracks. Then “Who’s Gonna Believe Ya” has more of a pop flavor and style, but still rocks.

I love “Take It All Away” immediately. It is like some glorious punk disco come down to save us all from the dreadful reality we find ourselves suffocating in. This is fun, fun, fun, in the general realm of something like Blur’s “Girls & Boys.” We then are treated to a reggae vibe with “Something To Say,” which is also totally enjoyable. “What a way to find you’re waiting in the wrong line/What a way to find that you’ve been in the wrong/Have you really got something to say?” That’s followed by “Price On Your Head,” a very cool tune that has a kind of ska rhythm, with some classic sounds on guitar. This song is deliciously depressing while simultaneously getting us grooving, making us dance to our personal doom as it is sung to us, you understand. “That’s how it goes/When nobody knows/You’re just a ghost/On the sidewalk at most/Remember that/In your one bedroom flat.” I love this.

“You Got Nothin’ On Me” basically rocks right out of the gate, with a full, loud, triumphant sound and great energy. “Useless Information” also comes on strong, featuring a solid rock sound. This track is taking me back to the music I grew up on in the late 1970s and early 1980s, but feels fresh and lively. And check out that guitar work. I’m seriously digging this album. Then “Someone Like You” is a wonderful combination of reggae and blues sounds. “Freedom’s not so free/For someone like me.” Man, this album is so damn good. Have I mentioned that yet? There is more great rock with “Maybe I’m Wrong.” Check out these lines: “Maybe I’m wrong/But I’m probably right/I’m not gonna stick around/But that don’t mean that you’re right.” These are lines we all are likely to say to someone these days. As the song fades out, we hear “Probably right” repeated. Oh yes. The disc then concludes with “It Was Never Meant To Be So Easy,” which has a bit of a 1960s rock thing going on, and also reminds me of Sugar (Bob Mould’s band from the early 1990s), and features a bass line that I love.

CD Track List
We Are Not Here To Help was released on September 6, 2019 on Cleopatra Records.
Posted by Michael Doherty at 9:45 PM