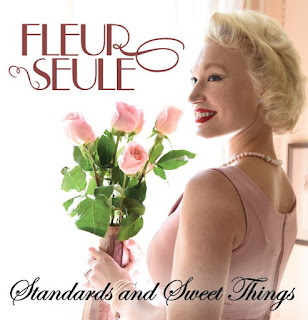 Fleur Seule is a jazz group based in New York that is led by a strong female vocalist straight out of the 1940s. This group specializes in music from that period, making the music sound as fresh as it was the day it was first performed, basically transporting us out of our current time. And the music they choose to cover comes from several different countries. Lead singer Allyson Briggs speaks multiple languages, and seems at ease singing in any one of several languages, not only transporting us to a different time, but to different places as well. Allyson Briggs, in addition to singing in this group, works as a voiceover artist, and clearly has perfect control over her voice. The band is incredibly talented as well, and features Jason Yeager on piano, Richard E. Miller on guitar, Michael O’Brien on bass, Paul Francis on drums, Ivan Llanes on percussion, and Andy Warren on trumpet. Backing vocalists Martina DaSilva, Vanessa Perea and Marg Davis perform on certain tracks. Their new album, Standards And Sweet Things, features exactly what its title promises. Listening to this music, our current cares and woes and fears seem to vanish. What more could we ask for?

The album opens with an absolutely delightful and cheerful rendition of “Taking A Chance On Love,” a song written by Vernon Duke, John Latouche and Ted Fetter for the musical Cabin In The Sky. This version swings and features some nice work on piano. Allyson Briggs’ vocals have that wonderful classic sound and style, and she even delivers some bright scat halfway through the track. It’s a wonderful way to get the album going. The band then turns to a Latin rhythm for a cover of “Piel Canela,” probably the most famous composition by Bobby Capó. This version has a cool, relaxed vibe, and features some sweet work by the backing vocalists. I also really like that lead on guitar.

When I think of “I Only Have Eyes For You,” I usually think of the 1959 version by The Flamingos. But the song was already a couple of decades old when that record was released. Fleur Seule delivers a great rendition, more in line with the way Peggy Lee with The Four Of A Kind performed it in the 1940s. It begins gently on piano, and then Allyson’s vocals have such a beautifully romantic sound that you want to make a home for yourself inside them. This version has a gorgeous, late-night sound, and listening to it, you are certain there is no chance for the romance to fail. It is one of the best renditions I’ve heard, and features some good work on bass. Fleur Seule then turns playful with “Zou Bisou Bisou,” a song from the 1960s (it is also sometimes written as “Zoo Be Zoo Be Zoo”). Richard Miller gives us some wonderful stuff on guitar. This group also turns in a fun, upbeat version of “Them There Eyes,” featuring some work on trumpet that should get you on your feet. Allyson Briggs is having a lot of fun with this one, and includes a bit of scat in the second half of the song. That’s followed by a gorgeous and gentle version of “Tenderly,” her vocals supported most prominently by piano, but also by some wonderful work on bass. I love this track.

Any way you slice it, “Shoo-Fly Pie And Apple Pan Dowdy” is a goofy song, and, yes, I’m totally enjoying the new rendition by Fleur Seule. It just gets better and better, especially when that delicious lead on trumpet begins, and then when those backing vocals come in. And then, when I think it can’t get any better, we get those totally wonderful touches on drums. It is a completely enjoyable track. However, my absolute favorite track on this disc is “La Vie En Rose.” It is beautiful and moving. In fact, this track is so good, my girlfriend asked me to dance the first time we listened to this album. Dancing with her while this song played is definitely the best thing that has happened in the last month or so. I could listen to this song all day. The disc concludes with a couple of Gershwin numbers. First we get “Embraceable You,” another beautiful romantic number featuring lovely work on piano. And then we are treated to a perky, swinging version of “’S Wonderful.” It is erroneously listed as “S’ Wonderful” on the CD case and liner notes, but wherever you put the apostrophe, this is a wonderful song. And this group does an excellent job with it. I particularly love the drums. As I’ve said before, you can never go wrong with Gershwin.

CD Track List
Standards And Sweet Things is scheduled to be released on October 9, 2019.
Posted by Michael Doherty at 9:58 AM