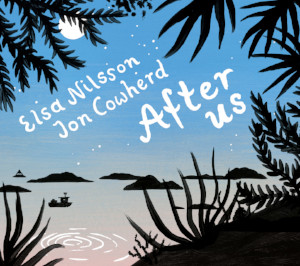 The duo of flutist Elsa Nilsson and pianist Jon Cowherd recently released a wonderful new album, After Us. The first time I popped on this disc was a morning when I was feeling frustrated and disappointed by people. That feeling occurs with some regularity in these ugly days of the Trump administration. Rather than arguing with people online, I decided to listen to this album, and its beauty and tenderness immediately set me at ease and reminded me of the good qualities that people possess. Music can lift us up out of the darkness of our own anger and hatred, and apparently we need it now more than ever. All tracks on this release are originals, most of them written by Elsa Nilsson.

The CD opens with “Same Trees,” a moving piece that begins with some pretty work on piano. The flute then enters gently, and the track has a calming effect. Once the music has us, the flute then raises us up a bit, takes us on a journey that has a natural beauty. There is a gorgeous piano solo toward the end. “Same Trees” is followed by “How To Keep Moving, How To Stay,” which has a brighter sound from the start, the flute rising and dancing, making things seem a bit lighter. And isn’t that what we need sometimes – a little of the weight lifted? Then more than halfway through, Jon delivers a wonderful solo on piano, and that leads to an interesting section where the flute has an insistent and percussive feel. By the way, I love the title of this piece.

“Distant Dawn” begins with piano, a somber tone that is quite effective in conjuring the dark night that the distant dawn of the piece’s title will eventually break. And when the flute comes in, it feels we are closer to that dawn, hints of light making their way into our field of vision. But this track feels of loss and despair, a melancholy that the sun might not in fact dispel. Still, there is something gorgeous here in Jon’s work on piano. And the flute, when it becomes dominant again, feels eager, perhaps even desperate, to lead us to a better place, to bring the dawn to us, if not move us to it.

There is something loving to the sound of “With A Smile,” but at moments near the beginning it feels sad as well. Is it perhaps a sad smile that is mentioned in the piece’s title? It then blossoms and grows, becoming beautiful and powerful, particularly the flute. It then relaxes again, leading to Jon Cowherd’s piano solo. That’s followed by “Blessings,” one of the tracks composed by Jon Cowherd. Here too the flute rises to become powerful and insistent while the piano provides a beautiful base, keeping us somewhat grounded even as we reach out. Then Jon’s solo on piano has an uplifting, even cheerful vibe. The other of the album’s tracks to be written by Jon Cowherd is “Baltica.” This one begins with piano, and has a sweet beauty. It feels like walking through some natural, ageless landscape, skin caressed by winds, the mind untroubled. The album concludes with its title track, “After Us,” which has a gentle touch. It feels almost like a letting go, leaving problems and everything behind. It then builds in power, rising to certain heights, before returning to that thoughtful, introspective place.