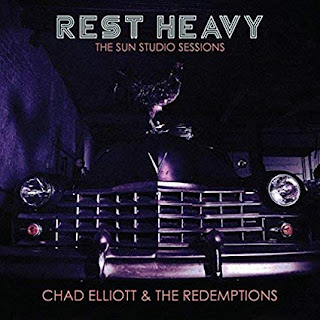 Rest Heavy: The Sun Studio Sessions, the latest release from Chad Elliott & The Redemptions, is an absolutely wonderful album full of soul and delicious vibes. It has elements of blues, country and folk, and features mostly original material, written by Chad Elliott. Joining him on this release are Tommy Lewis on electric guitar, harmonica and vocals; Travis McFarlane on piano, keyboard and organ; Jim Van Dorn on drums; Joseph Cafaro on upright bass; and Kevin Boehnke on trumpet and acoustic guitar.

The album opens with its title track, “Rest Heavy,” and I am on board immediately. I can’t help but love this song’s classic soul sound, and Chad’s vocals really are in line with some of those great 1960s soul numbers. And, hey, it’s a love song, with lyrics about meeting that special someone. “I was so lost before that day/Now with you I know the way.” This track features some really nice work on guitar, plus some great touches on harmonica. “How can we live apart when my heart stays with you?” Good question. The harmonica plays a prominent role right from the start on “Shy Of Shameless,” a tune with a catchy groove and a good dose of blues. And yeah, I can’t help but prick up my ears when Massachusetts is mentioned in a song (I’ve been living in L.A. for two decades, but Massachusetts is still home, you know?). In this song, we get the lines “And I’m on my way/To some Massachusetts town/Well, I woke up shy of shameless/And now nothing can get me down.” And I dig the smile in his voice on the line “We were pretty hard to ignore.” There is some good stuff on keys, and then, holy moly, halfway through the track, the music reaches another level with the addition of horn. Yes, this track just becomes more fun as it goes.

We then go more into country territory with “Hills Of Tennessee.” However, the horn keeps it from straying completely into that land, and gives the song just a bit of a New Orleans flavor. This song has a fun vibe too, a kind of light attitude, with more nice work on keys. “Cadillac Problems, Buick Times” has a playful title and a sound to match it. This one has a cool, jazzy, smoky vibe, in large part because of that delicious rhythm on bass and drums, but of course also because of that wonderful stuff on trumpet. It opens with these lines: “You got your big degree, but you still can’t pay the rent/Would someone tell me just where my money went?” Yup, that’s just about right. “And the rich get rich, and the poor end up on the floor.” There are several lines that had me smiling, even laughing at times. It’s good to be able to laugh at our troubles, don’t you agree? The horn gets the last word here, as it most certainly should.

“Alberta” starts off more in the folk realm, and develops into a powerful and moving number. Chad makes this one breathe, sometimes pulling us in close by creating an intimate space, and sometimes really belting out the lines, like he’s reaching out to whatever force shapes the universe. This is a surprisingly glorious song. “Alberta, I am home again/Long enough to see all my sad mistakes/Oh, long enough to see that it all turned out the way it was supposed to.”  “Dirty River/Catfish Blues” is a playful number with something of a loose, back porch vibe. It also features some good work on harmonica. The line “I can’t sink and I can’t swim” reminds of that line from the Grateful Dead’s “Ship Of Fools”: “And all that could not sink or swim was just left there to float.” “Water Under The Bridge” eases in, and has a lot of soul. I dig that organ. The album then concludes with its sole cover, a seriously cool rendition of “St. James Infirmary.” Everything is working just perfectly here – his vocals, the rhythm, and of course the horn. There is something delightfully dangerous here, you know, like with a dash of voodoo mixed in with the gin, and Chad is the mad doctor administering this wild concoction to us willing patients. Then toward the end there is suddenly a bass solo, followed by a drum solo. Excellent.

CD Track List
Rest Heavy: The Sun Studio Sessions was released on August 10, 2018.
Posted by Michael Doherty at 11:48 AM