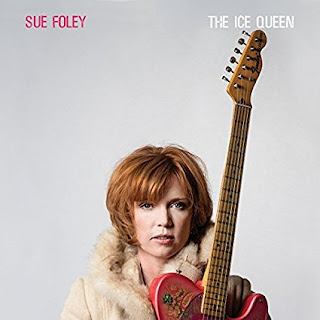 Sue Foley is a singer and songwriter working in the blues realm. Originally from Canada, she has been working mostly in Austin, Texas, and her new album, The Ice Queen, features some famous Texas musicians. Charlie Sexton, Jimmie Vaughan, and Billy F. Gibbons all join her on various tracks. This album features mostly original material, written by Sue Foley. She has been releasing albums since the early 1990s, but The Ice Queen is her first release on Stony Plain Records. The album was produced by Mike Flanigan, who also plays organ on many of the tracks.

The album gets off to a good start with “Come To Me,” which has a loose, somewhat slow Bo Diddley beat, and so something of a raw feel. Sue Foley has a great voice; it is sexy, strong, and cool, and when she urges, “Come to me, my darling,” who could refuse? Charlie Sexton provides vocals and plays slide guitar on this track. Charlie Sexton also joins Sue Foley on “81,” which follows. This is a slow, bluesy rock number, with a nice jam featuring good work on electric guitar. “You’ve got a cloud around your brain/And you’ve been driving through the rain/Until you wash away all that shame/You’ll be here again and again and again and again.” And I love the way she delivers the lines, “You’re low on fuel/You’re short on hope.” Chris “Whipper” Layton, known for his work with Stevie Ray Vaughan, plays drums on these first two tracks.

Things then kick into a more rockin’ gear with “Run,” which is delivered by just the trio of Sue Foley on vocals and guitar, Johnny Bradley on bass and George Rains on drums. And so it has a kind of rough bar band vibe, which I dig. Grab a beer, turn up the volume, and shake things up a bit. “I had to run/Out of the door, into the sun/I had to run.” That’s followed by “The Ice Queen,” the album’s title track, which begins as a mellow blues exploration, with a familiar, classic sound. This one is also done by the trio, though this time with Billy Horton on upright bass. “They call me the ice queen/Because I’m cool and I’m detached.” Oh, she’s cool all right, no question, but I don’t think she’s detached. “And all the men agree/I’m too slippery to catch.” There is something sexy about the way she delivers that line. There is also something sexy about the guitar work on this one, supported by the cool bass line. “They call me the ice queen/They don’t know me all that well/Before I compromise my love again/It will be a cold damn day in hell.”

Jimmie Vaughan joins Sue on vocals and guitar for “The Lucky Ones,” a fun blues number featuring some nice work on organ by Mike Flanigan. Sue and Jimmie deliver this one as a duet, and that gives the song a very positive feel, as they sing, “We are the lucky ones/We’re the fortunate sons/We’ve only just begun/We’re the lucky ones.” This one too has a classic, timeless vibe, and features some wonderful work on guitar. Its lyrics mention both Canada and Austin. Billy F. Gibbons joins Sue Foley on “Fool’s Gold,” playing guitar and harmonica, as well as providing vocals. In fact, he starts this one with that great rough voice of his. “Shines so bright in the ground/I pick it up, what you found/It’s fool’s gold/Yeah, that’s fool’s gold/Just a dream that you hold/Yeah, it’s fool’s gold.” Man, I can’t believe it’s been more than thirty years since I saw ZZ Top in concert. “Fool’s Gold” was written by Sue Foley and Mike Flanigan.

Sue Foley has horn players on a couple of tracks, the first of which is “Gaslight,” a groovy, fun number with some fine work on guitar. I like Sue Foley’s voice, and the way she delivers certain lines, but I think her guitar work is even more impressive. And of course I dig the horns on this track. Ephraim Owens is on trumpet, and Elias Haslanger is on tenor saxophone. The other track to feature horns is “If I Have Forsaken You,” and they are prominent right from this track’s fantastic opening. The horns certainly help to make this probably the disc’s best track, but this song also features my favorite vocal performance of the album. Sue Foley’s voice is sexy, beautiful, enchanting here. By the way, The Texas Horns are the folks playing on this track.

“Death Of A Dream” also features a beautiful, moving vocal performance, and is another of this album’s highlights. This one holds me from its opening moments. Sue Foley sings, “I found myself falling under his spell,” and that is just how I feel while listening to this song. Wonderful. That’s followed by “The Dance,” which Sue Foley performs solo – just vocals and guitar, with a gorgeous flamenco style to the guitar-playing. Here too she sings, “I find myself falling under your spell.” And again, I feel I’m under Sue’s own spell. “I never felt so alive/I wanted to die.” There is a little studio banter at the end of the track.

Sue Foley delivers a seriously fun rendition of “Send Me To The ‘Lectric Chair,” one of only two covers on this album. The album concludes with its other cover, “Cannonball Blues,” this one done by Sue Foley solo. Here she turns to folk with this Carter Family song written by A.P. Carter. “Listen to the train coming down the track/Carrying me away, but it ain’t gonna carry me back.”

CD Track List
The Ice Queen was released on March 2, 2018 on Stony Plain Records.
Posted by Michael Doherty at 10:59 PM