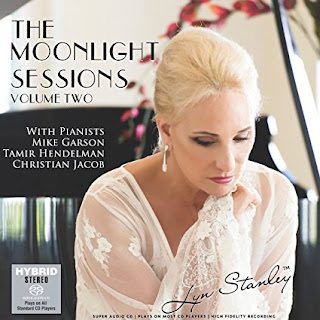 In May of last year, jazz vocalist Lyn Stanley released The Moonlight Sessions Volume One, a wonderful album composed mainly of standards. Of course, the Volume One part of the title implied at least a second volume, and in October, The Moonlight Sessions Volume Two was released. Again, she is presenting familiar material, but giving it her own personal spin, and the resulting music is excellent. Interestingly, there is one song that she included on both volumes, “How Insensitive.”

This CD opens with the fun “Makin’ Whoopee.” This song is almost always enjoyable, but this rendition in particular puts me in an excellent mood. Lyn Stanley’s vocal delivery is playfully sexy, her phrasing and use of pauses is delightful, and the way she sings certain lines, and even certain words, had me laughing. In particular, listen to the way she sings lines like “He’s washing dishes” and “He’s so ambitious” and “What’s this I hear.” The other musicians are in on the fun, on the sense of play, and I particularly like the work on drums and harmonica. That’s followed by “The Very Thought Of You.”  I always love hearing this song. Sometimes it make me happy, and sometimes it make me so sad, because I want to hold a special someone and be held by her, and this song makes me ache for her touch. It also chokes me up the way it’s used at the end of Home For The Holidays, a movie I love. Anyway, Lyn Stanley delivers a delightful and pretty rendition, her voice sounding close to us.

“Over The Rainbow” must be one of the most popular songs of all time, and on this album Lyn Stanley gives us a wonderful version. It begins gently with just piano, and when her vocals come in, they have an intimate sound. When she sings the line about the lullaby (“There’s a land that I heard of once in a lullaby”), it feels like a lullaby, like her voice is gently holding us, keeping us safe, taking care of us, as we drift off into a magical land. “Over The Rainbow” is followed by another song that Judy Garland performed, Irving Berlin’s “How Deep is The Ocean?” I love the moment when it kicks in, particularly that work on horn. This is an interesting rendition. Lyn Stanley’s delivery can be haunting on “Angel Eyes,” a darker song. Oh, when she gets low, she can hold us in our tracks. But she also finds lighter moments, as when she urges us to drink up. This track features some wonderful work on piano.

On this album Lyn covers Janis Ian’s “At Seventeen,” the strings sounding pretty at the beginning. Carol Robbins plays harp on this track, and there are also nice touches on piano. Yet this is a somewhat restrained production, which I appreciate. The focus is on her vocals, though with swells of strings at certain moments. God, seventeen seems like ages ago, and like yesterday. “At Seventeen” is followed by a wonderful rendition of “You’ve Changed.” Wow, I love the way she sings the word “blasé” in the line “Your kisses are now so blasé.” And is the horn responding, or is it on her side? I feel like it’s the man she’s singing to, sometimes rising in response, sometimes holding back so she can say what she needs to say, for when it gets a chance to solo, its sound is gentle, not forceful, as if to show – or hope to show – he hasn’t changed.

As I mentioned earlier, Lyn Stanley includes versions of “How Insensitive” on both volumes of The Moonlight Sessions. On the first volume, this song featured Tamir Hendelman on piano. The version on the second volume features Christian Jacob on piano, and the song is allowed to play as an instrumental for a while. We can almost imagine that their conversation is happening during this time, and then Lyn turns to us to tell us, “How insensitive I must have seemed/When he told me that he loved me.” The tone is serious, even pained, and then the song takes on that bossa nova rhythm. By the way, on the CD case and in the liner notes, there is a mistake, with “How Insensitive” listed after “Love Me Or Leave Me,” when actually it comes before. Whenever I hear “Love Me Or Leave Me,” I can’t help but think of The Peak Show, one of the three best live bands I ever saw. They used to do part of “Love Me Or Leave Me” in their song “O’Day.” Lynn Stanley is completely in control here, delivering a very cool rendition. This disc concludes with “I’ll Be Seeing You,” a song that is both sweet and sad. “I'll find you in the morning sun/And when the night is new/I'll be looking at the moon/But I'll be seeing you.”