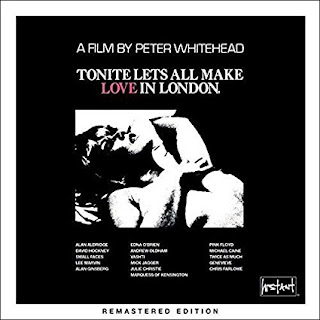 I still haven’t seen Peter Whitehead’s Tonite Let’s All Make Love In London, a film documenting the late 1960s London scene, but after listening to the soundtrack, which includes some dialogue from the film as well as music, I am certainly interested in checking it out. The film was released in 1967, the soundtrack in 1968. The soundtrack features some excellent tunes from artists like Pink Floyd and Small Faces, as well as snippets of interviews with folks such as Michael Caine and Mick Jagger. The new re-issue is a digitally remastered edition, from an original master tape, and – unlike the original vinyl release – presents the dialogue as separate tracks, which I appreciate. It’s actually a really nice package as well, folding out like a double album, with the liner notes on one side, and the CD on the other, with the CD in an inner sleeve as records are packaged. The back of the CD case is basically the same as the back of the original vinyl release, with the tracks mentioned in paragraph form rather than a list (and Pink Floyd called “The Pink Floyd”). The people responsible for this remastered edition obviously took the time and care to get it right.

It opens with Pink Floyd’s “Interstellar Overdrive.” I don’t ever again want to hear The Wall, but man, do I still love this early Pink Floyd stuff. It’s all about Syd Barrett for me, and this early instrumental number is wonderful. The full version of this recording is nearly seventeen minutes long, and was later released on London ’66 – ‘67. A nearly-ten-minute version was included on Pink Floyd’s first album, The Piper At The Gates Of Dawn. The tune has a delicious psychedelic and improvisational sound. Though the original vinyl soundtrack credits this one to just Barrett, Piper credits it to Barrett, Roger Waters, Richard Wright and Nick Mason. The soundtrack includes two more snippets of this instrumental tune.

One of my favorite tracks is The Marquis Of Kensington’s “The Changing Of The Guard.” It’s a delightful and odd tune about the troubles of the rich British folks. “We’ve had to sell our stately homes to pay our debts and taxes/And no one can afford a chauffeur-driven Rolls/If we ever get invited to the palace/Then we’ll all get there by bus.” It’s a playful tune, with a joke on “naval”/ “navel.” I’d never heard this song before, and I love it. It’s followed by another tune that’s new to me, “Night Time Girl” by Twice As Much. It was included on the band’s first LP, Own Up, and has a kind of sweet pop sound.

This soundtrack includes two Rolling Stones covers, both done by Chris Farlowe. The first is “Out Of Time,” which Farlowe released as a single in 1966 (he had a big hit with it in the UK), and also used as the title track for an LP. It’s a good version, though I prefer the second Stones cover, “Paint It Black,” which is another of my favorite tracks. It’s a very cool rendition, with some great backing vocals, though fades out to include an interview with Alan Aldridge before kicking back in again. The Stones connection is interesting, as this soundtrack album was originally released on Instant, a sub-label of Immediate Records, which was started by Andrew Loog Oldham, a man who also at that time managed the Rolling Stones and produced the band’s records (though obviously not on his own label). Snippets of an interview with Oldham are also included on this soundtrack (in which he talks about being proud of his work with the Rolling Stones, and about money). It’s also interesting that Mick Jagger is interviewed, but that the Rolling Stones songs are done by another artist. By the way, Mick Jagger talks about violence and anger, and about songwriting. He also mentions that audiences in the U.S. didn’t like the Stones until “Satisfaction.”

Another interview that stands out is that with Edna O’Brien, who says: “This thing of falling in love, you know, it’s such a nuisance. And I think women – no man will agree to this, but I’m sure it’s true – women are more devoted and committed to the notion of falling in love, and therefore they fall in love, than men are, because it is the one territory of adventure that a woman has.” And Julie Christie talks about The Beatles. “We were lucky enough that they were quite cool and hip, and there weren’t an awful lot of cool, hip people around. Not a majority. And that they became idols, and like any idol, they were copied. So that’s why London perhaps is now cool and hip.” Michael Caine, in his second interview, talks about short skirts, and is funny when distinguishing English men from other men. Lee Marvin also mentions miniskirts. The soundtrack ends with Allen Ginsberg reciting “Tonite Let’s All Make Love In London.”

CD Track List
Tonite Let’s All Make Love In London was released on June 2, 2017.
Posted by Michael Doherty at 11:08 PM