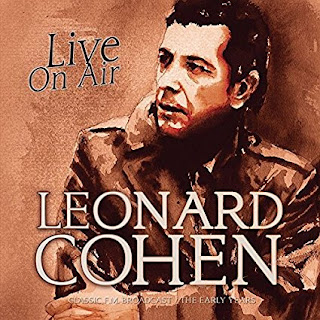 There are lots of these unofficial Leonard Cohen CDs being released these days, and I can’t help but want to own them all. Some are actually quite good, others not so good. Live On Air fits more in the latter category, at least as far as the overall package. It contains absolutely no information in the liner notes, just the track list. There is no information on the recording date or location, not even which station these tracks aired on. In fact, the only information on the front cover is misleading. It says, “Classic FM Broadcast/The Early Years.” The early years? Taking a glance at the track list will tell you this recording was not from the early years of Leonard Cohen’s career. More than half of the songs here are from the 1980s. Well, it turns out the lack of information may have been deliberate, for these songs are from the show Leonard Cohen did on November 9, 1988 in Toronto, a show that has already been released on CD at least a few times. I own it as Back In The Motherland and as Toronto ’88 (the latter I have on vinyl as well as CD). (It was also released as Warm Reception.) So here it is again. However, this time it includes two interviews. More on that in a bit.

First off, the sound isn’t great. There is a hiss. And the beginning of the first track, “Ain’t No Cure For Love,” is missing. The first line we hear is “I can’t believe that time is gonna heal this wound I’m speaking of.” So why does this particular recording get so many releases? I have no idea. And this isn’t the complete show. Each release that I own has the same songs. What happened to the other songs? Didn’t the radio broadcast feature the entire concert? And why are they not presented in the correct order? I haven’t found any answers. But of course the music is excellent, and perhaps after a while you can ignore the hiss. The first disc contains a seriously good rendition of “Bird On The Wire,” with some nice work on guitar and on organ. And it’s followed by a delicious version of “I’m Your Man,” and a wonderful country take on “Heart With No Companion.” “Take This Waltz” is beautiful, almost magical. It’s really one of the best versions I’ve heard (and I’ve heard it several times now). Oh, if only we could eliminate that constant hiss. The first disc ends with “Tower Of Song.” “They don’t let a woman kill you, not in the tower of song.”

The second disc opens with a good version of “Joan Of Arc,” and is followed by “Jazz Police,” the only Leonard Cohen song that I don’t like. There is something goofy about this song that just doesn’t work. That one section with the backing vocalists always reminds me of the theme to the original Star Trek television program. But I really do like that instrumental section partway through, with cool work on keys. “Jazz Police” was originally included on the 1988 album I’m Your Man. On this disc it’s followed by a much better song from that album, “First We Take Manhattan.” This disc also contains an excellent version of “Coming Back To You,” one of my favorite songs from Various Positions (which is my favorite Leonard Cohen album). “Even in your arms, I know I’ll never get it right/Even when you bend, when you bend to give me your sweet comfort in the night.” That’s followed by one of Leonard Cohen’s most famous songs, “Suzanne,” and as always he delivers a captivating performance of this one. The concert ended with “I Tried To Leave You” and “Whither Thou Goest,” and both of those songs are included here to conclude the second disc. “I Tried To Leave You” features each of the band members (including vocalists Perla Batalla and Julie Christensen) getting a chance to shine. “Whither Thou Goest” is gorgeous.

Each disc contains an interview, and these interviews make it worth owning this particular release. They were recorded backstage before the concert. In the first interview, Leonard Cohen talks about being on the tour bus, having just arrived from Chicago. When asked if he wants people to take him seriously, even though he has a sense of humor, Leonard answers: “I don’t have any strategy in this matter. My friends know I’m good for a laugh or two.” He talks about his success in Europe, and about the differences between country and pop music, and about his interest in the work of Federico Garcia Lorca. The first interview is approximately eight and a half minutes, and is positioned between “Take This Waltz” and “Tower Of Song.” The second interview comes after “First We Take Manhattan,” and is approximately six and a half minutes. It begins with a question about the meaning of “First We Take Manhattan.” “I think it means exactly what it says. It is a terrorist song. I think it’s a response to terrorism.” He also talks about going to a monastery, and about ceremony, and about sex. He says that after the tour, he’ll get back to work writing.