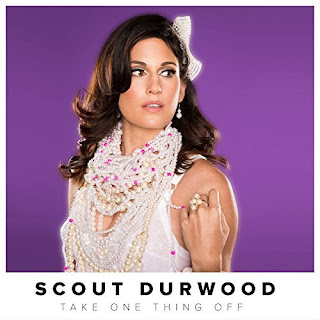 Scout Durwood’s new CD, Take One Thing Off, is a combination of fun pop tunes and stand-up comedy, though the songs are often pretty damn funny too.  She alternates between comedy and music, with the comedy generally working as introductions to the tunes. The comedy was recorded live, while the music was recorded in a studio. And though I was laughing through much of this disc, Take One Thing Off certainly isn’t devoid of substance. Scout has something to say, and now is the perfect time to listen. While Donald Trump refuses to acknowledge Pride Month, the rest of us – regardless of sexual orientation or gender identification – can support the ongoing fight for equal rights, the fight against discrimination. And why not laugh while doing so? I firmly believe the world is a better place while people are laughing.

Take One Thing Off begins with an introduction, which of course is the right place for an introduction. This track isn’t needed, but is short (less than a minute). It basically just explains that the comedy and music were recorded separately. We’re then treated to the first of the comedy tracks, “Sex Positive,” in which she tells the audience that she would release a sex tape of herself, then adds “But I am a lesbian, so I don’t feel like the world is ready for that much meaningful eye contact.” That leads to the title track, “Take One Thing Off,” a goofy fun song about stripping (“Trust me, less is more”), with a dance rhythm. “Now shut your mouth and dance.” Obey her. Get on that dance floor, friends!

“Drinking” is a comedy bit about… well, drinking. “I love alcohol so much.” This functions as a good introduction to “All The Pretty Bottles,” a pop love song to those glorious vessels of spirits. “All the pretty bottles/Pretty, pretty bottles/Prettiest that I have known/All the pretty bottles/I can hear you calling/Pretty soon.” Oh yes. Pretty much everyone I know has been drinking a lot since the election (which feels like sixty-five years ago), and I think this song will be appreciated.

“Baseball Game” is comedy bit about being hit on by a moronic and juvenile man. I think this was the first track from the album that I heard. It’s followed by an earnest love song titled “Fallin’ In Love.” This pop song really works for me. By the way, the musicians backing Scout Durwood on this CD are Dave Darling on guitar and programming, Arlan Oscar on keys, Rich Ruttenberg on keys, Alfredo Ballesteros on saxophone, and Ismael Pineda on percussion. Backing vocals are provided by Bernie Barlow, Gary Pinto, Natasha Pinto and Dave Darling. (Darling also produced and mixed the album).

A lot of the comedy on this album has to do with being a lesbian. In “Men In LA,” she says: “They want to know if I’ve ever had sex with a guy. That’s a fair question. And the answer to that is yes. But in my defense, it was the week I moved from New York to Los Angeles, and the men in L.A. look so much like the lesbians in New York.” In the final stand-up piece on this CD, she takes on a serious subject and actually finds humor in a horrific incident. “Being gay and straight, it’s basically the same thing. In fact, except for once, I have never been beaten up in a violent hate crime. It’s like one violent hate crime, but otherwise zero violent hate crimes.”

My favorite track is “The Wedding Song.” I fucking love this song, in which a demented bride-to-be explains everything that is going to happen at her wedding, everything she demands, this woman being the first to establish all the nonsense that has become tradition. “I feel like it should cost as much as college, but have no meaning to anyone but me,” she says. “Also, I want presents, but I get to pick the presents.”  There is a really funny video she made for this song. I showed it to my girlfriend, but she didn’t find it quite as funny as I do. (If you haven’t seen it yet, click here.) That’s followed by “I’m Cool, Right?” which is a song too, so in this case one song follows another, though this song certainly mixes in a healthful does of comedy, with lines like “I am both beautiful and prone to fall down/But I’m cool, right?” This song also actually refers to her career as a comedian.

Then out of nowhere comes a serious, pretty rendition of “My Funny Valentine,” written by Richard Rodgers and Lorenz Hart. This is the CD’s only cover, and it comes as a wonderful surprise. I certainly wasn’t expecting this. Scout Durwood is accompanied only by piano, and by the end she’s belting out the lyrics. She concludes the CD with “Here We Are,” a song that slowly pulled me in. It becomes more powerful and engaging as it goes on, and ends up being one of my favorite tracks. “They fear our love/But we won’t fear back/Your hand in my hand.”

CD Track List
Take One Thing Off was released on May 19, 2017 on Blue Elan Records. As Scout sings in “Go Go,” “If you came here to get noticed/Go the fuck home/If you dream of being POTUS/Go the fuck home.”
Posted by Michael Doherty at 3:10 PM