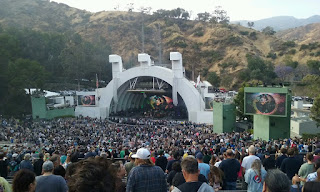 Dead & Company kicked off their summer tour a few nights ago in Las Vegas, and last night I caught the first of a two-night run at The Hollywood Bowl. Parking at that venue is a nightmare, so we parked at a lot on Ventura and took a shuttle over the hill. It costs $6 round trip. Not bad. A boy of like twelve or thirteen years gave us instructions on how to find our particular bus on the way home. No way any of us was going to remember that, but we all nodded and said we’d do our best. I was just glad they got an adult to drive the bus. I worried for a moment that this boy was going to get behind the wheel. There were metal detectors on the way into the venue, so the line moved rather slowly. I don’t recall seeing those the last time I was here. When was that? Three years ago? Five? Eight? No idea. “How many of you are there?” the woman at the metal detector asked me. How many of me? One, I hope. “One, I hope,” I said. But my friend, answered, “Two – me and him.” Oh yes, one of me, one of him. We put our keys and phones together in a little grey plastic dish, and a moment later were inside the venue, looking at the T-shirts for sale (a bit too expensive for me), and then heading to the bathroom. There was a bit of confusion, as the guy in the stall next to me in the loo said to some other guy, “Turn a blind cheek,” which made me smile. A moment later he asked, “Is that it?”

At 7:08 p.m. (by my phone anyway; my friend’s phone said 7:09 p.m. – aren’t these things run by satellites?), Dead & Company took the stage and got things going with “Shakedown Street.” A disco ball was shown on the screen behind the stage at the beginning, embracing what some folks have always said about this song. And the way Bobby delivered “You gotta poke around” that one time, I felt I had no option but to start poking. Then suddenly John Mayer was singing, “Shake it down, shake it down, shake it down now.” Is that new? Did I hear that right? The band got into a good, relaxed kind of jam to groove to. Then for a moment it was unclear what song they were starting. Where is this going? There was a collective sigh and cheer when they launched into “Cold Rain And Snow.” The music came in waves, and I could feel it in my teeth. “Ain’t gonna be treated this a-way.” I had to remind myself to look at the guys on stage, not the guys on screen. Stick with reality, man whichever bits are handy or available.

A nice “Black-Throated Wind” led straight into “Ramble On Rose.” Was there a bit of crackling in the speakers at a few moments in the last couple of songs, or was that just me? “Ramble On Rose” contained a good jam, with nice stuff on keys. The energy was feeling right. And don’t worry, Bob, none of us can remember all the lines to that song. At moments during “Cumberland Blues,” their voices sounded perfect together, like on the word “mine” at the end of one of the line “Gotta get down to the mine.” There was more good stuff on keys. Ooo-wee! And what was Mickey Hart banging together? On the screen, it looked like a pair of old wooden Dutch clogs. The word is that John Mayer loves “Althea.” Well, so do I, and I was happy to hear it last night. I always appreciate that Hamlet verse. They then wrapped up the first set with Chuck Berry’s “The Promised Land.” The first set ended at 8:16 p.m. (though probably 8:17 on my friend's phone).

During the set break, the bathroom line wasn’t very long. Some long pink hair halfway to the stage was bright in the venue lighting. The child to my right was wearing a KISS sweatshirt. The feeling in the place was mellow and good, relaxed, happy. The band returned to the stage at 9:04 p.m., and kicked off the second set with a jam that led into “Truckin’,” and then after another jam eased into “He’s Gone.” I enjoyed the vocal jam at the end of the song. But then afterward, some people came on stage, and suddenly everyone was gone and the lights went out on stage. And then the lights around the stage also went out. This was just before 9:30 p.m. After a few minutes, a lot of us sat down. We’re old. The world has gotten so fucking weird, and people were surmising maybe something was tossed onto the stage – a rose or a joint, most likely – or perhaps there was a bomb scare. Hey, what kind of talk is that? People are tripping around you, for fuck’s sake, don’t mention a bomb. Bloody hell, our world is so fucked up that it’s even hitting us here. A Dead show was always a haven from that sort of thing. Someone said he saw dogs being led across the stage. I don’t know. At 9:36 p.m., someone on stage (I think it was Bob) said, “All clear, kinda.” And the band oddly went back into “He’s Gone,” starting with the line “Like a steam locomotive rolling down the track.”

The band then played “Help On The Way,” leading into “Slipknot!” and then into “Franklin’s Tower.” It was during “Slipknot!” that the band delivered some interesting jamming. During “Franklin’s Tower,” it hit me again that I’m still not entirely sold on John Mayer’s voice, but this was a fun, bouncy version of the song. It led into “Drums,” which had a steady electronic beat, a pulse, and after a while I felt like I was at the Dead’s version of a club. Then suddenly that beat broke in order to venture into stranger terrain and then they transitioned smoothly into “Space.” Some of the sound seemed to be coming from behind me, enveloping me until I was part of the sound, if only briefly. It began like a great hum behind me, but then it was a giant engine on the stage gaining power, and all the sound shifted. But the sound soon became gentle, as we touched down lightly into “Stella Blue,” one of my favorite songs. Ah, some really nice vocals from Bob Weir. There wasn’t much power on the “Dust off those rusty strings just one more time” part, but it was still a really good version. They concluded the second set with “Sugar Magnolia.” A minute later they returned for the encore. When my friend saw John Mayer with an acoustic guitar, he said to me, “You might get ‘Ripple.’” And indeed, they finished the show with my all-time favorite song, “Ripple.” Perfect. The show ended at 10:47 p.m. 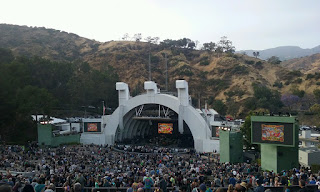