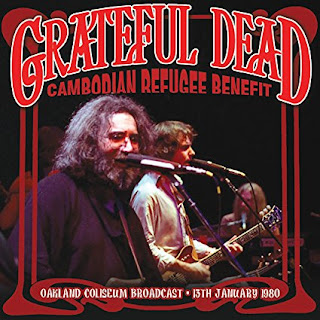 A lot of Grateful Dead concerts were broadcast live on the radio for folks who weren’t able to get tickets. And lately some of these recordings have been popping up as CD releases. The latest such release is Cambodian Refugee Benefit, which, although is only a single CD, actually contains most of the concert the Grateful Dead performed on January 13, 1980 at the Oakland Coliseum. It does not, however, contain the entire show, despite the claim in the CD liner notes. This seems a rather hasty release, as the liner notes contain other bogus information – such as crediting the drum solo to Robert Hunter and Bob Weir. Robert Hunter was one of the band’s main lyricists, and Bob, of course, was on vocals and guitar, so neither had anything to do with the drum solo. And, interestingly, a good chunk of the text in the liner notes was lifted from a blog titled Lost Live Dead (specifically the entry from December 4, 2014).

Anyway, it was a short show because the Grateful Dead were not the only folks on the bill that night. Also performing were Joan Baez, The Beach Boys, Carlos Santana and Jefferson Starship. So the Dead did just one set. What is missing from this CD release is the first song of the set, which was “Jack Straw,” and the encore, which was “U.S. Blues.” The CD kicks off with “Franklin’s Tower,” and again it is a bit odd to be missing “Jack Straw,” because “Jack Straw” leads directly into “Franklin’s Tower,” and so you can hear just the very end of “Jack Straw” at the beginning of this disc. It’s a good, fun rendition of “Franklin’s Tower,” with some jamming. The sound isn’t perfect, with a bit of hiss, reminding me of some of my old tapes. By the way, this was the first show of 1980, and at the time of this show, Brent Mydland had been a member of the band for only nine months or so. He provides some tasty stuff on “New Minglewood Blues,” which follows “Franklin’s Tower.” (Did Bob forget where he was? He sings, “It’s T for New York City.”) There is certainly a lot of energy at the beginning of this set, and both “New Minglewood Blues” and “Tennessee Jed” are crackling at times.

From what we can hear on the disc, some people in the audience are very excited when Bob starts “Looks Like Rain,” the only mellow song of the set. The band follows that with “Don’t Ease Me In,” which has a strange shift in sound near the beginning. “Playing In The Band” provides the only real opportunity for the band to get out there, and though they definitely jam on this one, they never get into truly weird territory. The energy level remains pretty high, and they seem to be having a great time, keeping that engine flying down the tracks. It slides right into “Drums” (though this CD still has it as the same track; then, like two minutes into the drum solo, it becomes a new track). At one point the audience becomes part of the drum solo, providing hand claps. This “Drums” is actually for me one of the highlights of the disc, and I wish it were longer. It leads into a cool jam (not “Space”) which very quickly announces itself as “Not Fade Away,” but doesn’t quite go into that song for a little while, though definitely does so before this disc starts a new track. The new track point indicating the beginning of “Not Fade Away” seems arbitrary, especially as by that point the band has clearly already been playing the song for a while. On the back of the CD case, it says that Carlos Santana plays with the band on “Sugar Magnolia,” but it sounds to me like he’s playing on “Not Fade Away.” And I’ve read in a few sources that indeed he plays with the band on “Not Fade Away” as well as “Sugar Magnolia.” I’ve also read on two websites that John Cipollina plays with them on “Not Fade Away.” At any rate, it’s an unusual and pretty cool  and incredibly energetic rendition of “Not Fade Away,” and it leads directly into “Sugar Magnolia,” which concludes the set (and this disc).

Strangely, “Sugar Magnolia” fades out near the five-minute mark. So this disc is missing all of the “Sunshine Daydream” part of the song. I am assuming this is due to time constraints on the CD.  However, the CD is 75 minutes 54 seconds, and the missing part of “Sugar Magnolia” is less than three minutes, so it should have fit. But again, this seems like a hastily assembled release. While it’s good to have this show on CD, there are actually better quality recordings available online.

CD Track List
Cambodian Refugee Benefit was released on October 7, 2016 through Golden Rain.
Posted by Michael Doherty at 12:17 AM