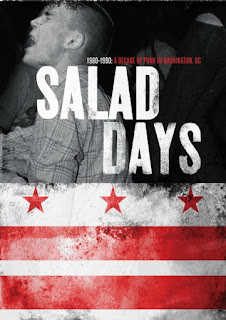 Salad Days documents the hardcore punk rock scene in Washington D.C. from 1980 to 1990. When the film opens, music plays over images of the capital during that decade. Remember, this was the decade of that bastard Ronald Reagan and his partner and successor, the criminal George Bush Sr. These were dark days politically. While the film reminds of us this briefly at the beginning, the focus is on the music, not the politics, that is at least until the music became involved in the politics halfway through the 1980s.

Salad Days relies heavily on interviews with key musicians from the period, including members of Minor Threat, Teen Idles, The Untouchables, Iron Cross, Gray Matter, Youth Brigade, Dag Nasty, Fire Party and Fugazi. Many of those interviewed talk of the power and influence of Bad Brains. Henry Rollins says, “Bad Brains was one of the most influential bands of my life.” They also talk about how the punk guys had to look out for each other. Sab Grey, of Iron Cross, says, “There wasn’t very many of us, so we kind of had to stick together.” Violence was directed at the punks early on.

As they did have to rely on each other, and as the scene was relatively small early on, the bands did most of the work themselves, creating record labels and booking shows and so on. And while watching the film, you’ll wish you had been a part of this community. One thing that’s interesting is that most of these D.C. bands did not last long, and those interviewed talk about that. Like by the time the Teen Idles’ record came out, the band was already a thing of the past, and Minor Threat had already formed. (Minor Threat themselves lasted only a few years.)

There is also some concert footage, mainly from the Washington D.C. venues DC Space and Wilson Center, including S.O.A. performing in 1980 (the picture quality is poor, but it’s still cool to see), Minor Threat, The Untouchables, Faith, Void and Fugazi.

The film also goes into the so-called Straight Edge movement within the punk scene, and we hear a bit of the Minor Threat song “Straight Edge,” which inspired it. Brian Baker, of Minor Threat (and later of Dag Nasty and Bad Religion) says, “For me, the biggest misconception about D.C. punk rock is that Straight Edge was the law and rule of the land, and that this one Minor Threat song has defined basically the entire region and all the bands within, when it was really a song off an EP.” Musicians talk about how the whole Straight Edge thing actually came to divide the punk community.

Salad Days also gets into how women were treated in the scene, and the problems of increasing violence and slam-dancing. I always hated people who would slam-dance at concerts I attended, because it took focus from the music. Instead of being able to lose yourself in the music, you had to worry about these assholes banging into you. And for a while they would do it at every show. I remember some dipshits doing it at a They Might Be Giants show in Portland in the early ‘90s, and the band was like, “We’ll stop the show if you don’t cut that out.” It’s great to hear Ian MacKaye (of Minor Threat and Fugazi) speak against slam-dancing in this film.

The stuff on Revolution Summer is interesting, and includes concert footage of several bands. There is also material on Positive Force and the political involvement of punk music starting in 1985, and the differing opinions about that turn.

By the way, the title Salad Days comes from the title a song by Minor Threat. But the phrase is much older than that. It comes from Shakespeare’s Antony And Cleopatra. In the first act, Cleopatra says, “My salad days,/When I was green in judgment, cold in blood,/To say as I said then.”

The DVD includes more footage from interviews with folks like Brian Baker, Ian MacKaye (who gives a great analogy for making a music video), Monica Richards and Henry Rollins. There is also a bit of footage of director Scott Crawford as a child outside of a punk show.

Salad Days was directed by Scott Crawford (who also appears in the film), and was released on DVD on September 18, 2015 through MVD Visual. By the way, the title on screen is simply Salad Days, but the title on the DVD case is Salad Days: A Decade Of Punk In Washington, DC (1980-1990).
Michael Doherty at 2:21 PM