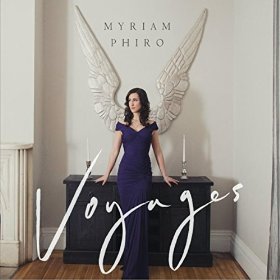 Jazz vocalist Myriam Phiro’s new CD, Voyages, her first full-length release, was exactly what I needed after a somewhat crazy week at work. This CD put me in a fantastic mood within moments, and I was dancing around my apartment, singing along to the first couple of tracks, all cares lifted miraculously, almost effortlessly. I fell in love with her the way I fell in love with Julie Delpy when she sang at the end of Before Sunset. Her voice is not just beautiful. It’s also friendly and inviting, and at times intoxicating (like on “Besame Mucho”). Here Myriam Phiro delivers excellent renditions of some old favorites, making them feel alive again. And she’s backed by some seriously talented musicians, including Vinny Raniolo on guitar, John di Martino on piano, Nicki Parrott on bass and Rob Garcia on drums. This album reminds of us why these songs are so often returned to, that they really are some of the best songs ever written.

Myriam Phiro kicks off the CD with a beautiful, delightful, delicious rendition of Cole Porter’s “I Love Paris.” She gives it a really fun feel, and Adrien Chevalier adds a whole lot to this track on violin. Benjamin Ickies adds some great touches on accordion. “I love Paris in the winter when it drizzles/I love Paris in the summer when it sizzles.” This rendition has something of a big finish, which is just perfect. This track is a total delight, and fans of bands like Squirrel Nut Zippers should definitely check it out.

She follows that with “Beyond The Sea/La Mer,” written by Charles Trenet. Though I like both versions, I’ve always preferred the French version. She begins the track with the French version, then playfully asks in English, “Sounds familiar?” before going into the English rendition. Partway through, she does a bit of scat, which leads into a very cool instrumental section, with a bass solo by Nicki Parrott. And then Myriam goes into the French version.

It’s difficult to listen to “It Had To Be You” without thinking of that scene from Annie Hall, where it’s sung by Diane Keaton. I love the way Myriam Phiro delivers this one. Just listen to the places she takes lines like “For nobody else gave me the thrill/With all your faults, I love you still.” She makes it sound like this song is coming from within her, sung for the first time, rather than a cover that’s been done countless times. And I really like what John Di Martino does on piano here. “It Had To Be You” was written by Isham Jones and Gus Kahn.

One of the most interesting tracks on this CD is “Caravan,” with some excellent work on drums by Rob Garcia and on trombone by Robbie Klein. The whole band really shines here, but Rob Garcia is particularly incredible. (Of course, after Whiplash we probably expect a lot from drummers on “Caravan.”) “This is so exciting,” Myriam sings. Oh yes, indeed!

Myriam Phiro gives us a gorgeous, passionate, sexy rendition of “Besame Mucho.” I love Adrien Chevalier’s work on violin here, helping to make this track one of the disc’s many highlights. Myriam follows that with “I Don’t Want To Set The World On Fire,” with a vocal delivery that is both pretty and playful. And I love the section with the whistling, two voices in conversation without a word spoken. Robbie Klein provides vocals and plays trombone on this track. Nicki Parrott’s work on bass adds to the kind of playful vibe of this rendition.

The version of “On A Slow Boat To China” on this CD has a good, easy groove, and begins with the chorus, skipping the various introductions that are in some other versions (such as “It seems to me that I’ve tried long enough/To prove to you my love is strong enough”). But after singing the song, the tempo picks up, and she then sings one of those introductions, “There is no verse to this song/’Cause I don’t want to wait a moment too long.” And then she goes into the main section of the song again, this time at a quicker pace. Dominique Gagné plays flute on this track.

Another really good and playful track is Myriam Phiro’s rendition of “Tico Tico No Fubá” by Zequinha de Abreau (here simply titled “Tico Tico”). A few months ago, Frank Vignola and Vinny Raniolo included an excellent version of this song on Swing Zing! (combining it with Frank Vignola’s “Djangomania”). While Myriam’s version is quite a bit different, it too is wonderful, and it too features Vinny Raniolo on guitar. Adrien Chevalier plays violin on this track. While their work is delightful, it is Myriam's voice that really surprises me on this one. She certainly does some interesting things here.

Myriam Phiro concludes the album with a more recent pop song, a slow, sweet rendition of The Beatles’ “In My Life,” her vocals accompanied only by piano. This is an excellent version, giving focus to one of the best set of lyrics in all of the Beatles catalogue.

CD Track List
Voyages is scheduled to be released on CD on October 6, 2015.
Michael Doherty at 7:03 PM