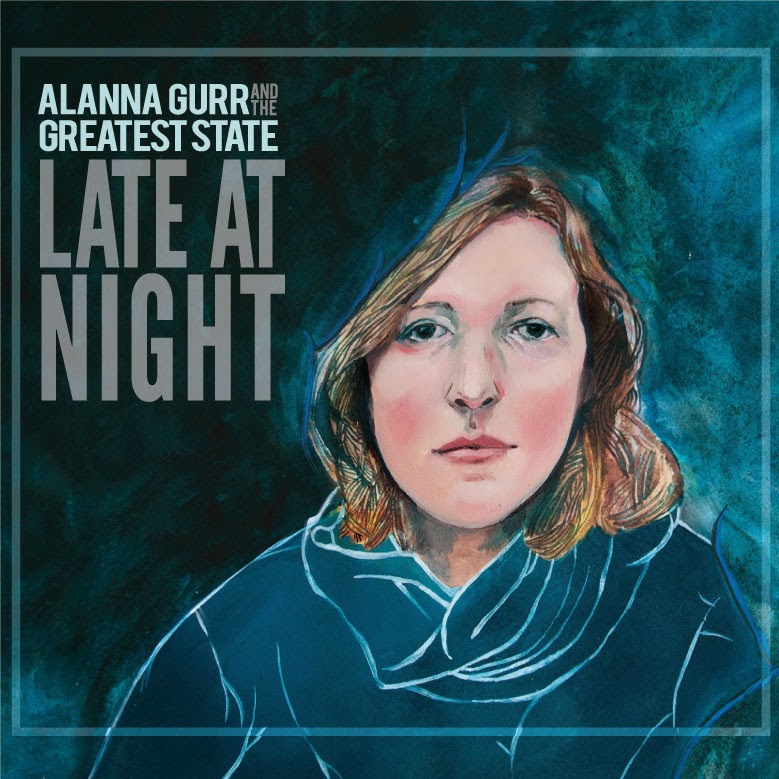 Late At Night is the second full-length album from Alanna Gurr And The Greatest State, a band based in Guelph, Ontario. This album is a delightful mix of folk and country, with some early 1960s pop elements present on a couple of tracks (particularly “Golden Coast”).

The first thing that strikes me is Alanna Gurr’s voice. There is something youthful and innocent, almost childlike about the way she sings “Swimmer,” which works in a truly interesting way with the lyrics, especially lines like “I’m not a kid no more.” It’s a sweet, mellow tune to open the album. “Take me out and throw me in…let’s see if I can swim” We all reach that point, where we have to find out what we’re capable of.

“By My Side” has a cool, kind of early 1960s feel to the groove at the beginning, then with touches of country. This is a truly pretty and wonderful tune, and the line “Yeah, you’re always by my side” has such a comforting feel to it. The backing vocals added to that line are a nice touch. This song makes me happy, and is one of my favorites from this album.

The repetition of the title line in “Hell Or High Water” - “That I would walk through hell and high waters for you, babe” - has a strong, peculiar effect. After a few times through, other voices join her, adding to the strength and power and earnestness of the line. And the sweet, sad tones of the pedal steel beneath the vocals give the song a mellower, more wistful feel. It all works to such a strong effect on the listener.

I love Alanna’s vocals on every track, but perhaps my favorite vocal performance on the album is that of “It’s Been A Long Time.” While still maintaining its warmth and honesty, her voice also has a bit of a cry at moments. Here is a taste of the lyrics: “I know your touch and I know your hands/Better than I know my own/And I know your stories, and I know your songs/When I hear them, I feel at home/But it’s been a long time since I’ve seen my love.”

“Golden Coast” is much closer to pop, and I suppose that’s at least partially why it was chosen as the album’s first single. It has a bright feel, with 1960s pop elements to its rhythm, which makes it fun. There are even hand-claps in this one at one point. But it is the delightful “ooh ooh” backing vocals that really make me love this track. There are some wonderful lyrics. I’m particularly fond of these lines: “I left my pictures in a tear-stained note/Remember me however you want/But I know that I’ll be remembering you” and “Well, tonight I’m going to drink to you/Then I’ll probably just drink a few more.”

"Weight Of Love" begins as pure folk, with a nice traditional feel, then takes on more of a country vibe when the other musicians come in for the instrumental sections. There is a sad sweetness and a sweet sadness to this tune. It's about a couple who haven't seen each other in a while. “Even though I’m in your heart and you’re in mine.” And at the end, she sings, “Will you think of me and the love we've had/So when you think of me, it won't be so bad/And when I think of you and all the love we knew/And when I think of you, it won’t be so sad.”

"Trouble" has a gorgeous, kind of darker vibe that really pulls me in. The song builds just right so that when the electric guitar takes a short but glorious lead spot, you are ready and eager for it. (I wish it went on a bit longer.) This is one of my favorite tracks. "And we all can toast to getting what we want."

Late At Night concludes with "Thunder Rolls," a nice, mellow song in which Alanna sings, “I’m tired of waiting/I’m tired of asking/When are you going to go and leave me now?” That leads to such a pretty instrumental section. The other instruments then quite down before her vocals return. That’s something I really appreciate about these recordings. Her voice is allowed to tell these stories, to be the most prominent element when it needs to be. It’s not competing with other sounds. Yeah, I'm kind of in love with her voice.

Late At Night was released on April 22, 2014 on Missed Connection Records.
Posted by Michael Doherty at 4:37 PM