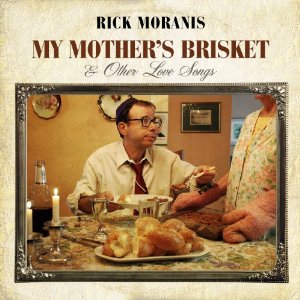 I’ve been a fan of Rick Moranis since the days of Bob and Doug McKenzie, and I had Great White North on vinyl. One of my few regrets was selling that album when I was in high school (I’d had the entire thing memorized, so didn’t think I’d want to listen to it again – oh, so very wrong).

My Mother’s Brisket & Other Love Songs, the new album from Rick Moranis, is very funny and also very Jewish. By that I mean that the subjects of these songs are all related to aspects of Jewish culture. As much as I was laughing, I’m sure I’d be laughing exponentially more were I Jewish. There are many references that I didn’t get, and ended up searching online for information several times. Just glancing at the track list will give you an idea of the type of humor. And actually, doing just that gave me a laugh before I’d even opened the CD. The title of the third track, “Live Blogging The Himel Family Bris,” had me laughing. (I thank Seinfeld for educating me on what a bris and mohel are, so that I could appreciate the song).

By the way, Rick Moranis can actually sing (check out his vocal work on “Parve” for example). The music is good too, with a full band. This is not one of those comedy albums dominated by synthesized sounds. This album features not only guitar, piano, bass and drums, but also accordion, harmonica, saxophone, clarinet, trumpet, flugelhorn, pedal steel, violin, cello and pipa. This is some serious music here, which I totally appreciate. Although one track, “Belated Haftorah,” is delivered a cappella (with some guidance and coaching on certain lines). The last line of that song is great: “And I really don’t mind being here on a Saturday because I’m really not that good a golfer.”

The album’s title track is a love song about his mother’s cooking. Well, about brisket in particular. The line that makes me laugh every time is “Her brisket can even make flossing seem transcendental.” And there is a Star Wars reference in “Asian Confusion,” for those keeping track of such things.

“I’m Old Enough To Be Your Zaide”

The opening track, “I’m Old Enough To Be Your Zaide,” is a love song from the perspective of a man who is bewildered that the woman has chosen to be with him. “Zaide” is Yiddish for “grandfather.” Yeah, I looked it up, but it’s clear from the context. There are a lot of lines that had me laughing, such as “Now get off of my lap/I have to take a nap” and “I love the touch of your skin/Are you sure we’re not committing a sin/If something happens, notify my next of kin.”

Toward the end, the quickly delivered line “Be careful of my knee” makes me feel old, as I’ve had recent occasions and need to say just that. Oy vey.

The album’s title is no lie (though it is funny): many of these songs are love songs of sorts. “My Wednesday Balabusta” is a love song about his cleaning woman. He confesses, “I’m weak in the knees watching her clean.” The crux or dilemma is “I keep things too tidy so she’ll like me too/I really should give her some more things to do.” And her love note to him is wonderful.

“Live Blogging The Himel Family Bris,” the song whose very title tracked me up, did not disappoint when I listened to it. The song itself functions as a point-by-point description of the events, as would be included in the blog. He describes the guests and the food (“I loaded up on paté, but I think it’s really Spam”) and other things he discovers. And, as he sings, “Most of it is true, but more of it is fiction.”

Musically, “Pu-Pu-Pu” is the most fun of all the tracks. It has a good hook and energy, and is also quite funny. The line “The mohel might sneeze” is a frightening thought.

“I Can’t Help It, I Just Like Christmas” is a very silly tune, and one I’m adding to my Christmas play list. I’m always on the lookout for good Christmas tunes (because most of them seriously suck). As you might guess, the song is about a Jewish man who enjoys the Christian holiday. And every time he sings the line, “I know it’s not supposed to be for us,” he cracks me up. This song has a great country atmosphere, with some nice work on guitar.

That leads to a parody of “The Twelve Days Of Christmas” titled “The Seven Days Of Shiva.” Rick Moranis and Dave Thomas did a parody of that song on the Great White North album. “The Seven Days Of Shiva” is basically a list of food that folks bring. I have to admit I have no idea what most of these dishes are, but much of it cracked me up anyway, especially the last verse.

“Oy, The Mistakes I Made”

The album’s closing track, “Oy, The Mistakes I Made,” opens with the lines, “Oy, the mistakes I made/I should have spent more time in the shade/Kept the curtains closed so the fabrics wouldn’t fade.” Such serious mistakes. It’s a slow, delicious lament, and is one of my favorite tracks. It ends with that great truth, “It just feels so damn good to complain.”

My Mother’s Brisket & Other Love Songs was released on June 18, 2013 on Warner Bros. Records.

Note: I also posted this review on Pop Culture Beast.

Posted by Michael Doherty at 7:06 PM