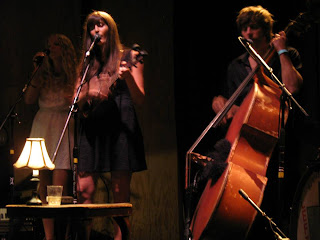 Recently I reviewed the new CD from Leftover Cuties, The Spark & The Fire. It is one of my favorite albums of the year so far, so I was seriously excited to get to see the band perform at their CD release show in Los Angeles. And now I'm just completely enamored of them. They put on a fantastic concert at Bootleg Theater, an intimate and perfect setting for this band.

They took the stage at 9:18 p.m., with no opening act, and kicked off the show with "Places To Go," the title track from their 2011 release. They then played "Thick And Thin," the opening track from The Spark & The Fire. Lead vocalist Shirli McAllen said they were going to play a few from the new album, and they went into "Once Again," which after a false start was wonderful. That's one of the new CD's many highlights. They followed that with "What's The Matter?" which is also from that album. Throughout their set they featured more songs from The Spark & The Fire, including "Shame," "Clarity" (probably my favorite), "One Heart" and "If Only It Could Be." And they ended the set with a really fun version of "Everyone." They also did a rendition of "You Are My Sunshine" that was actually kind of sexy, or at least sultry. The horn helps, of course.

This band is seriously impressive. I was particularly impressed by what Stuart was able to accomplish with a relatively minimal drum kit (though with a cow bell, wood block and two bells you might find at a hotel lobby added). He later demonstrated a new toy (or old toy, as it turned out), which sounded like a car horn (he then shouted "Get out of the way!"). And then Mike Bolger was able at times to play piano and horn simultaneously, as he did on "Shame," with the left hand on the keys and the right hand holding and playing the horn. Besides being great musicians, these guys were clearly having a lot of fun, and that definitely spread to the audience. They also had several guests join them, including Kate Nicholson on backing vocals for several songs.

The encore was "I've Been Waiting" and an extended rendition of "When You're Smiling." 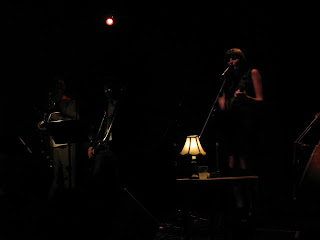 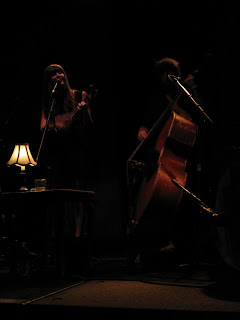 (I forgot to ask Austin about the fur on his upright bass.)
Posted by Michael Doherty at 1:49 AM