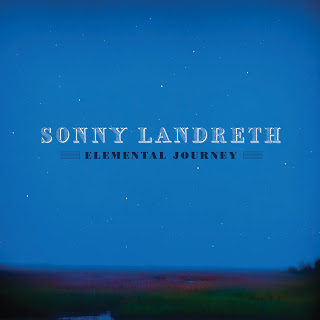 Elemental Journey is Sonny Landreth's eleventh album, and his first instrumental record.  I have to admit, it took a while for me to get into this one.  It's not completely effective for me.

For an instrumental to work for me, generally the main instrument has to have the same emotional impact and power that a human voice has (or can have). And while I won't deny the electric guitar's capability to reach that (there are moments in some of Jerry Garcia's solos that have left me in tears), it's difficult for it to sustain over a course of a song or entire album - more difficult than it is for, say, a violin or cello or piano.  It seems to me it's more difficult for electric instruments than for acoustic instruments, as there is something more human and intimate in the acoustic instruments.  So while I can appreciate the talent of the playing - and Sonny Landreth is a darn good guitar player - and admire the structure of the songs, I'm not drawn in or moved by this album for the most part.

Fortunately, he does add string arrangements to certain tracks (the arrangements are by Sam Broussard).  And some of the tracks are quite good, particularly "Wonderide," "Elemental Journey" and "Forgotten Story."  All of the songs were written by Sonny Landreth.  And some feature guest players such as Joe Satriani, Eric Johnson and Robert Greenidge.

Elemental Journey opens with "Gaia Tribe," a guitar rock tune. This is the sort of song that needs lyrics, at least for me.  It's just not that compelling as an instrumental. It feels like the section toward the end of a long Deep Purple song, which makes sense as this track features special guest Joe Satriana on guitar (he played with Deep Purple in the mid-1990s). But as such, it sounds like it should eventually go back to the chorus, rather than be complete in itself.

"For You And Forever"

"For You And Forever" a little more fun, but still it feels that the lyrics have been cut from it, rather than a song that was conceived as an instrumental. It does not feel complete as it is. That being said, there is some nice work on guitar.

"Wonderide" is probably the most fun track on the CD (though it could still benefit from a good set of lyrics).  I particularly like the opening section of this track. The string arrangement is interesting, and works both in conjunction with and as contrast to the guitar and keyboard.  This is my personal favorite on this album.

"Elemental Journey," the album's title track, is pretty cool, and features some interesting changes. I particularly like the effect of the acoustic guitars beneath the electric guitar.  This song also has a catchy rhythm.

"Forgotten Story is another of my favorites. I dig the steel drums in this one, which gives this track a very different feel from the others. The section where the steel drum is essentially the lead instrument is wonderful.  That's Robert Greenidge on steel drums.  Mike Burch is on drums on this track.

Elemental Journey concludes with "Opening Sky," which has moments of beauty.  This is a slower, more thoughtful piece, and in some ways is the most emotionally satisfying track on the album.

Musicians on this album include Sonny Landreth on guitars, David Ranson on bass, Steve Conn on keyboards, Brian Brignac on drums, Doug Belote on drums, and Mike Burch on drums.

Elemental Journey is scheduled to be released on May 22, 2012 on Landfall Records.