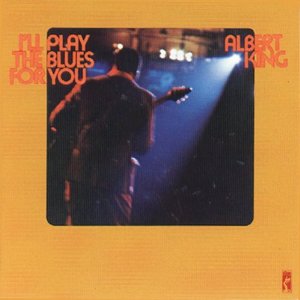 Albert King's incredible 1972 album I'll Play The Blues For You is being re-issued as part of the Stax Remasters series. This special re-issue includes four bonus tracks, all of which were previously unreleased (more than twenty minutes of extra music). This has become one of my favorite blues albums.

"I'll Play The Blues For You"

I'll Play The Blues For You opens with its title track, a song that is so cool, so smooth. It's the blues as a love song, like some serious (and seriously loving) foreplay.  The first lines are, "If you're done and out, and you feel real hurt/Come on over to the place where I work/And all your loneliness I'll try to soothe/I'll play the blues for you." It's sexy and intimate, in Albert King's vocal delivery and in the overall vibe of the song.

This song has a sweet spoken word section ("Come on in, sit right here, let's rap a while/You see, I'm kinda lonely too").  The guitar solo doesn't get too wild or loud, but rather sticks with the great vibe of the song, and is just perfect. And I love that he says, "Excuse me" before starting it.  There is also some really nice work by The Memphis Horns.

"I'll Play The Blues For You" was written by Jerry Beach.  It was released as a single, though cut into two parts, as the song is more than seven minutes long.

An alternate version is included in the bonus tracks, and I might actually prefer that one.  It doesn't have the spoken word section, but still contains little bits of spoken word, like "How are you feeling now?" and "Can you feel it?"  And it's longer, at nearly nine minutes.  In this case, the more the better.

"Little Brother (Make A Way)" is a fun bit of mellow funk, that opens with a spoken word section: "Now you young folks is raving about how bad you want to be free.  But I want to tell you what it was like in my day for an old man like me. Are you ready for this?" Yes, oh yes.  This song has such a good groove, and it features more smooth vocals from Albert King.  The lyrics are serious, but ultimately it's a very positive tune.  This one fades out too soon.  I could easily use another three or four minutes of this one.

"Breaking Up Somebody's Home" is possibly the most famous tune on the album. It was released as a single, which reached #35 on the R&B chart (and #91 on the pop chart). It was co-written by Al Jackson Jr. who played drums in Booker T & The MGs, and it has that kind of Booker T groove to it.

Albert King really sinks his teeth into this tune, finding all sorts of great places to play within its beat and structure.  At more than seven minutes, the song also finds room for a nice funky section four minutes in that is completely delicious.  And once again, his vocals are really smooth.  Here is a taste of the lyrics: "I've got nowhere to turn to/Tired of being alone/I feel like breaking up somebody's home."

Ann Peebles was the first artist to record this song.  It was also covered by Bette Midler, Bob Seger, and Etta James.

"High Cost Of Loving" is a more serious and tough-sounding blues tune about the expense of keeping a woman happy.  Albert King sings, "I bought you a leather coat, you said you wanted a mink." (Hey, I want a mink.)  And then, "The high cost of loving is getting higher every day/It seems like the less I make, lord, the more I have to pay."  I love that he adds, sort of under his breath, "I ain't got no money/Yeah, but I'm a good lover."

"High Cost Of Loving" was written by Allen Jones and Sherwin Hamlett.

"Don't Burn Down The Bridge ('Cause You Might Wanna Come Back Across)" is a great blues tune, with a delicious groove, and some wonderful, spirited work on horns. This is one of those tracks that makes you want to turn up the volume and dance around your home. Give yourself some elbow room and shake yourself out (Maybe move the breakable stuff to a safer distance first).

And when it's over, don't worry, because there is an alternate version in the bonus tracks.  This version is rougher and doesn't include the horn section, but still has a great energy. (Though I do prefer the first version.)

The other two bonus tracks are "I Need A Love" and "Albert's Stomp."  The first is a funky tune with some great stuff on horns and bass, and of course some fantastic licks on guitar.

CD Track List
This special re-issue of I'll Play The Blues For You is scheduled to be released on May 22, 2012 through Concord Music Group.  Last year Concord Music Group released The Definitive Albert King On Stax.
Posted by Michael Doherty at 2:54 PM