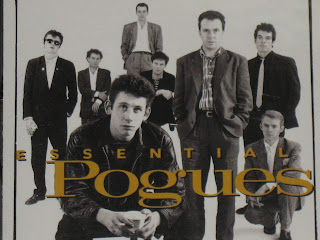 Christmas is a time for folks to go a little mad. And there are plenty of reasons for it - the stress, the shopping, the relatives, the flashing lights, the weather, the trash, the expense, the disappointment... and of course the music. By and large, Christmas music is just awful. And you can't get away from it. It's everywhere.

But cheer up, because there are some good holiday songs out there. The following are some excellent Christmas songs.

Who would imagine that the best Christmas song would be by an Irish folk-punk band? And who could guess that a song with the line "Happy Christmas, your arse, I pray God it's our last" would be one of the sweetest songs ever recorded? Well, "Fairytale Of New York" by The Pogues is by far the best song ever written for this holiday, and it is indeed truly sweet.

It starts out on Christmas Eve in the drunk tank, and the man's thoughts turn to his woman and he says, "I've got a feeling this year's for me and you/So happy Christmas/I love you, baby/I can see a better time when all our dreams come true."

The woman's part is included too, as she reflects back on their relationship: "When you first took my hand on a cold Christmas Eve, you promised me Broadway was waiting for me." They trade compliments and insults, while "The boys of the NYPD choir were singing 'Galway Bay.'" The female vocals are sung by Kirsty MacColl.

She says, "You took my dreams from me when I first found you."

He replies, "I kept them with me, babe/And I put them with my own/Can't make it all alone/I built my dreams around you."

"Fairytale Of New York" was originally released on the band's 1988 album If I Should Fall From Grace With God. It was also included on their 1991 compilation Essential.

Another surprise for the Christmas holiday is "2000 Miles" by The Pretenders. On the same album that found Chrissie Hynde in the "Middle Of The Road" and "Back On The Chain Gang" The Pretenders included this beautiful and moving Christmas song.

The song fades in, like it's approaching the listener, like a warm light in the distance. Chrissie sings, "In these frozen and silent nights/Sometimes in a dream, you appear/Outside under the purple sky/Diamonds in the snow sparkle/Our hearts were singing/It felt like Christmas time/2000 miles is very far through the snow/I think of you wherever you go."

This song was included on The Pretenders' 1983 release, Learning To Crawl. It was written by Chrissie Hynde.

"Christmas Wrapping" by The Waitresses

"Christmas Wrapping" by The Waitresses is absolutely one of the best Christmas songs ever written (probably second only to The Pogues' "Fairytale Of New York"). It's totally fun, it has a great rhythm, and it has a sweet and happy ending. Who knew forgetting cranberries could lead to bliss? And this is the band that had a hit with "I Know What Boys Like."

"Father Christmas" by The Kinks

"Father Christmas" is one of the best Christmas rock songs. For those who are unfamiliar with this Christmas tune, here are some of the lyrics: "Father Christmas, give us some money/Don't mess around with your silly toys/We'll beat you up if you don't hand it over/We want your bread, so don't make us annoyed/Give all the toys to the little rich boys."

The first line is, "When I was small I believed in Santa Claus, though I knew it was my dad." "Father Christmas" was written by Ray Davies. It was originally released as a single, and then included on the 1986 double album Come Dancing With The Kinks.

"I Believe In Father Christmas" by Emerson, Lake & Palmer

Emerson, Lake & Palmer's "I Believe In Father Christmas" is a beautiful song about the loss of innocence. It was written by Greg Lake and Peter Sinfield.

This song features some excellent lyrics, including these lines: "They sold me a dream of Christmas/They sold me a silent night/They told me a fairy story/'Til I believed in the Israelite/And I believed in Father Christmas/And I looked to the sky with excited eyes/When I woke with a yawn in the first light of dawn/And I saw him and through his disguise."

It's available on the compilation, A Rock 'N' Roll Christmas.

"The Pause Of Mr. Claus"

Arlo Guthrie is most famous for his wonderful song "Alice's Restaurant," which tells a funny story about Thanksgiving, littering and the draft. There are a couple of other songs in which he tells a nice, long tale, such as "The Motorcycle Song" and "The Pause Of Mr. Claus."

"The Pause Of Mr. Claus" is dedicated to the members of the F.B.I., and in his introduction to the song Arlo talks about the difficulties of having that job. Like "Alice's Restaurant," the song itself is quite short. Here are some of the lyrics: "Santa Clause has a red suit/He's a communist/And a beard, and long hair/Must be a pacifist/What's in the pipe that he's smoking?"

"The Pause Of Mr. Claus" was included on Arlo Guthrie's 1968 album Arlo.

"Do They Know It's Christmas?"

"Do They Know It's Christmas?" is an excellent song by Bob Geldof and Band Aid. This was released as a single in November of 1984. Everybody from the pop world is on this recording, including David Bowie, Duran Duran, Culture Club, Wham, U2, Spandau Ballet, The Boomtown Rats, Big Country and Bananarama.

Dan Hicks And The Hot Licks

And if all of this is not enough, check out this year's holiday release from Dan Hicks And The Hot Licks, titled Crazy For Christmas. This entire album is actually really good, and it includes some wonderful new material, as well as some excellent covers of traditional holiday songs.

That should help those who wish to put together some good original music for the holidays. There are of course several other good Christmas songs, including some excellent covers of traditional tunes.