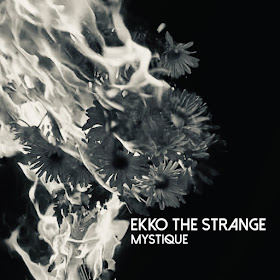 Ekko The Strange is the project of one man, who wrote, performed and produced the music on this new album, Mystique. The music has a dark, electronic sound, with some noticeable 1980s influences. It also has an interesting power, this music quickly getting a strong grasp on the listeners, and then taking them on an unusual journey. Part of the inspiration came from Ekko’s time in Warsaw, Poland, a city that was destroyed during World War II and had to be rebuilt afterward, creating a new identity for itself. That seems to inform a lot of the music on this record, this idea of being in a foreign place, as well as forging an identity amid unfamiliar surroundings. This is his second full-length album, following 2020’s Haunting Me.

The record opens with “Exotic,” which begins with a good beat, then soon takes us to an uneasy, dark place, that moment like waking from a long sleep to find the world has completely changed and the world’s pulse is no longer our own. But there is a strange freedom in that too, for we are unmoored, with no ties to this reality. “Welcome home to the unknown/I’m free.” That’s followed by “Głęboki (Deep),” a song obviously inspired by his time in Poland. This one features an electronic beat, a strong, insistent pulse. Now we do feel immersed in this odd world, moving within it, caught up in its strange motion, finding our own feet moving to its beat. And soon we are even accustomed enough to interact, to find attraction in those we encounter. “You came on like a heart attack/It hit me like a car crash.”

There is something oddly spiritual about “Vamps” at the beginning, like we are summoned to a church that opens only at night, guided there by electronic bells and neon lights flashing along the road. And when we arrive, it turns out to be more night club than church, but people offer their prayers all the same, and in doing so manage to break free from certain restraints. “We begin to live again.” The first side of the record concludes with “Channel,” an instrumental track that also feels like a summoning, a gathering of people in the night. It is a night of steam and lust and danger and dancing, with a dark heart at the center, an elaborate beast stretching out from that, with tentacles reaching out to pull us in from wherever we may be hiding.

The second side of the record opens with “Reanimate.” As it begins, we get the sense of furtive movements in the dark, perhaps an escape, to a more familiar place or time. And then suddenly something bursts open and we are no longer alone. Have we been discovered? Certainly, the sense of urgency has not decreased. There is a need behind this music. “Let’s crack open the sky once more/Let’s leave it all behind.” That’s followed by “The Concept,” which has an interesting opening, like a sound reaching us from another time, the whisper of a music box from a simpler time, before the prominent beat takes hold. There is an odd sense of identity lost, and yet there is an unexpected beauty to this track. “Lonesome survivors/In a world gone mad.” Ah, doesn’t that describe the way many of us feel in the here and now? And we get the feeling we are not alone as we continue.

From the mists at the beginning of “Your Shadow” emerges an electronic pulse. And soon the voice whispers into our ears, from right behind us in the darkness. We could close our eyes and fall backward directly into the voice, and somehow expect to be safe, protected, even if it means oblivion. “Total destruction/The future arrives on time.” Then things begin to build and swirl and grow. That leads straight into “Ekko Reflektor,” the album’s final track. After a few moments, this one begins to open, like an elaborate electric flower, containing passageways that wind down past the petals into its heart and down perhaps beyond that. There is a strong power in its center, a generator working tirelessly.

Mystique is scheduled to be released on April 15, 2022 on HiFi Mantra Records, and will be available on both vinyl and CD.