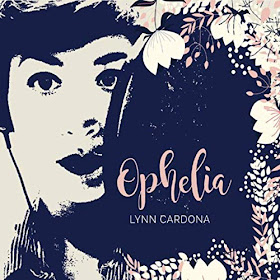 Lynn Cardona is a jazz vocalist and songwriter based in Los Angeles, creating music that resonates emotionally with the listener through a sort of baring of the soul. Her latest release, Ophelia, is an EP of three original tracks, all co-written by Lynn Cardona. Joining her on this release are Josh Nelson on keys, Nozomi Yamaguchi on guitar, Michael Hunter on flugelhorn, Dave Robaire on bass, and Dan Schnelle on drums.

The EP’s opening track, “A Little Too Late,” starts off in an intriguing, introspective, even haunting place, with Lynn’s voice supported by some beautiful and touching work by Josh Nelson on piano. “I’m reminded of a fella that I know/Maybe he loved me because he let me go.” After a minute or so, the song takes a surprising turn as the other musicians come in, becoming a lighter and brighter-sounding tune, almost in the pop realm. There is something friendly and adorable about Lynn’s vocal performance that quickly endears her to you. “And then summer comes around/And I drift away on oceans and salty summer seas/Float away on cotton candy clouds and cool breeze/And then winter comes around/And I skate away on frozen frosty fiver streams.” Yeah, she makes the entire year sound like a delightful dream. “A Little Too Late” was written by Lynn Cardona and Matt Politano. That’s followed by “Mother Earth,” some nice work on guitar setting the tone for this one, after which a good groove is soon established. “Let me be mother, let me be earth/I will swallow all that is dying and make it new again/You might be destructive, but it’s okay/Because I will teach you how to love me.” As we approach the 2020 election, with all the political troubles facing this country, it might seem easy to forget about climate change, but the environmental crisis is far and away the most important issue facing us. If we don’t solve the climate crisis, none of the other problems will matter. This song is not, however, any kind of preachy number. Rather, it is about motherhood, and the responsibilities that go with it, and has a rather comforting and uplifting vibe. “When you are tired, lay your head in soft pastures.” We want to still be able to rely on Mother Earth. But can she rely on us? This track, which was written by Lynn Cardona and Nozomi Yamaguchi, features some excellent work by Nozomi Yamaguchi on guitar.

As good as those first two songs are, it is “Ophelia,” the EP’s title track, that really stands out and works its magic on me. This was the song that aroused my interest in this release. I am a big fan of Shakespeare’s work, and so of course the title drew my attention. And though not all songs titled “Ophelia” are necessarily related to the character from Hamlet, this one is about contemplating suicide by drowning. It opens with the lines, “I want to retire, expire/Sink right down to the bottom of the ocean/No motion/Said this all before, but now I swear it.” She sounds so innocent as she delivers these lines, and the lines are presented honestly, plainly, even sweetly. This track features an absolutely gorgeous and moving vocal performance, the best of this disc. “Don’t you know how far I’d go for love?” This is a song that reaches out to us, and I love Michael Hunter’s work on flugelhorn, as well as Josh Nelson’s work on keys. “Ophelia” was written by Lynn Cardona and Charlie Wood.