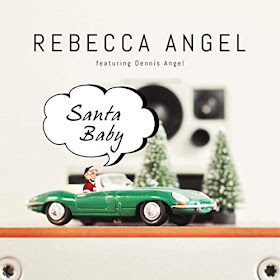 Christmas may be the least sexy of all the major holidays, yet there are a few Christmas songs that are undoubtedly sexy. Probably at the top of that short list is “Santa Baby,” a song written by Joan Javits, Philip Springer and Anthony Springer, and originally recorded by Eartha Kitt (a woman so sexy herself that she was cast as Catwoman). “Santa Baby” is also quite playful, which helps place it among the best Christmas songs. Now vocalist Rebecca Angel has chosen it for her new single. I first heard Rebecca Angel when she released another holiday single, “My Favorite Time Of The Year,” back in 2015. That song was written by her father, Dennis Angel, who also played flugelhorn on that track. He joins her again on flugelhorn on this new recording. Also backing Rebecca Angel on her new single are Jason Miles on keys, Jonah Prendergast on guitar, Reggie Washington on bass, and Brian Dunne on drums.

Rebecca Angel delivers an absolutely wonderful rendition of “Santa Baby.” Reggie Washington gets it started on bass, and when the rest of the band kicks in, Rebecca offers a bit of gentle scat before delivering the song’s first line. I love that line, by the way: “Santa baby, slip a sable under the tree for me.” Santa had better hurry if he plans on getting me a fur coat because soon he won’t be able to purchase one here in California. Rebecca’s voice has a sweet element to it, an innocence mixed with some excitement, delivered with an intimacy that is perfect for this song. “Santa Baby, I want a yacht/And really that’s not a lot/I’ve been an angel all year.” Well, Santa can’t argue with that, can he? I appreciate how Rebecca’s last name adds another level of playfulness to that line.

CD Track List
Santa Baby is scheduled to be released on November 29, 2019 on Timeless Groove Records.
Michael Doherty at 9:35 PM