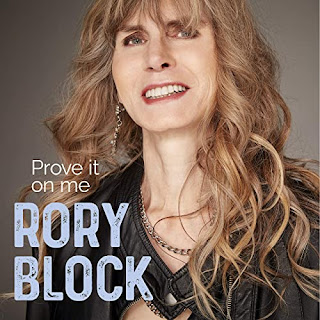 Rory Block has been putting out excellent blues albums for several decades now, and has won multiple music awards, including the 2019 Acoustic Artist Of The Year. She has also been nominated for the Koko Taylor Award. She is an accomplished songwriter as well as singer, though in 2018 turned to the compositions of other writers in a tribute to Bessie Smith. Titled A Woman’s Soul, this album featured music that was recorded by Bessie Smith, and was the first release in a series dedicated to strong female voices in blues. Now she has released the second volume in the series, Prove It On Me, this one not focused on a single performer, but rather on several female vocalists from the twentieth century. Some of these women you are certain to know, but Rory also mixes in some lesser known artists, people who certainly deserve to be remembered. Rory Block gives us a fresh and personal look at some excellent material, and on this release provides all the vocals and plays all the instruments.

She opens the album with a cool rendition of “He May Be Your Man,” a song written and originally recorded by Helen Humes, who sang with The Count Basie Orchestra before beginning her solo career. I love the groove of Rory’s take on this song. She follows that with “It’s Red Hot,” a seriously delightful and playful tune written by Madlyn Davis in the late 1920s. This is one of Madlyn’s most well-known songs. Rory Block is clearly having a great time with this track, even offering little laughs, such after the line “Damn, that’s hot” and after “Spicy jelly” toward the end. Then Rory gives us her spin on another completely enjoying song, “If You’re A Viper,” a tune about getting high. Rosetta Howard was active in the 1930s and 1940s, recording “If You’re A Viper” in 1937. A line from this song that happens to stand out during this time of unemployment is “Don’t care if you don’t pay rent.” Let’s hope most landlords agree with that line because pretty soon a lot of us are going to be unable to do it, high or not.

Ma Rainey is certainly a famous name in the blues, often referred to as the Mother Of The Blues, and her song “Prove It On Me” provides this album with its title. “They say I do it, but ain't nobody caught me/Sure got to prove it on me/Went out last night with a crowd of my friends/They must have been women, 'cause I don't like no men.” How bloody cool is this song? And it was clearly ahead of its time. It was recorded in 1928. Rory then dips into gospel with “I Shall Wear A Crown,” a traditional number that Arizona Juanita Dranes recorded in the late 1920s. Here Rory delivers an unusual and wonderful lead vocal performance, as well as providing some gorgeous backing vocals. The guitar has a gloriously cheerful sound.

While this album pays tribute to some of the early women in blues, it does contain one original song, “Eagles,” a powerful track that fits in perfectly with these classic songs. “Now I’m a singer/Of roots, of country blues/You could say I love the music/You could say I’ve paid my dues.” Oh yes. This song is one of my personal favorites. And it is certainly not out of place for her to include one of her own songs on an album that celebrates important female voices in blues music. By the way, she talks a bit about this song in the disc’s liner notes. That’s followed by “Wayward Girl,” a song recorded by Lottie Kimbrough, who was active in the music scene in the 1920s. “I’ve been thinking all day/Thinking about the past/I said, thinking, thinking about the past.” It’s a moving song about losing one’s mother.

Memphis Minnie is another well-known figure in blues. She recorded quite a lot of records in her time. Rory Block selects “In My Girlish Days,” a song written by Ernest Lawler and recorded by Memphis Minnie in the early 1940s. Rory delivers a great, raw and powerful vocal performance here, and this track is another of the disc’s highlights. Merline Johnson is someone I wasn’t really familiar with. She recorded a lot of songs in a rather short period of time, sometimes under the name Yas Yas Girl. Such was the case with “Milk Man Blues,” the song Rory chooses. Apparently, quite a few of her songs were suggestive. Here is a taste of the lyrics to this one: “I said, now early in the morning/Well, the milk man brings milk to me/‘Cause you know he’s got the best milk in town/It’s just as sweet as it can be.” Rory then wraps up this excellent album with a great country blues number by Elvie Thomas, “Motherless Child,” about a daughter not following her mother’s deathbed advice and regretting it. Yes, the loss of a mother is a theme running through several of the songs chosen for this release. Elvie Thomas recorded “Motherless Child” in 1930.
CD Track List
Prove It On Me was released on March 27, 2020 on Stony Plain Records.
Posted by Michael Doherty at 12:27 PM