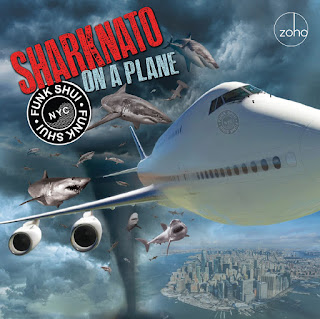 Yes, I admit it is the album’s title that initially drew me to this disc. I am a big fan of shark movies (I even have a small role in one of them), and I totally enjoyed the Sharknado series (though I think I still haven’t seen the final entry). So of course I love the play on the title of those films, combining that with the North Atlantic Treaty Organization, and with another goofy film that I like, Snakes On A Plane. With a title like Shark NATO On A Plane, you know the album is going to strive to lift your spirits. It is going to be fun. And Funk Shui NYC (not to be confused with Sacramento’s Funk Shui Band) makes good on the promise of that title. This band, which is based in New York, is led by Dave Morgan on saxophone and flute, and Rob Susman on trombone, both of whom also wrote some of the album’s tracks. The other talented musicians making up this band are Chris Hemingway on alto saxophone, Charles Lee on alto saxophone, Stan Killian on tenor saxophone, John Isley on tenor saxophone, Scott Burrows on trombone, Seneca Black on trumpet, Chris Anderson on trumpet, Bryan Davis on trumpet, Jordan Hirsch on trumpet, Noel Cohen on guitar, Dan Asher on bass, Rex Benincasa on percussion, and Peter Grant on drums. These guys create the most delicious cocktail, mixing funk and jazz and rock. We could all use a little joy right now, and this band is ready to provide it.

Shark NATO On A Plane opens with its title track, which has something of a New Orleans vibe, particularly in that delicious percussion. This is a lot of fun, just the thing to temporarily push away your worries and anger over the state of the world. Let it be your theme music as you dance your way down those empty supermarket aisles. There is a whole lot of wonderful stuff on horns here. “Shark NATO On A Plane” is an original tune, written by Rob Susman. It is followed by another original tune, “July Groove/September Funk,” this one composed by Dave Morgan and Noel Cohen. A groovy and funky bass line gets this one moving straight away. Then those horns give it something of a 1970s feel, something that makes me smile. What a joy it is to listen to this one. I love that trumpet lead part, which lifts things to a higher plane. The band then follows that with a delightful take on the theme to Barney Miller, a show I loved when growing up. That was a show my parents also enjoyed, and I must remember to play this track for them. I think my mom in particular is going to seriously dig it. The theme has a distinctive and memorable bass line and some great work on horns, so it’s an excellent choice for this group to tackle. This rendition features a great beat, and has an undeniably funky feel almost from the start. Partway through it mellows for a bit, and then that horn takes us all into some beautiful realm while that wonderful percussion keeps us grounded. It’s fantastic. And then the bass takes on that familiar theme once again.

I may have mentioned this once or twice, but you can never go wrong with Gershwin. The members of Funk Shui NYC prove this once again with their cheerful, upbeat rendition of “Summertime,” complete with a Latin groove. I love the way the brass instruments shout out gloriously. This is certainly not a mellow, reserved or restrained version. The group then returns to original material with “Into The Fourth Dimension,” composed by Rob Susman. I like the way this one builds, getting exciting, taking us on some adventure, then suddenly breaking into a funky section halfway through. And yes, that means another cool bass line. Then it begins to get rowdy again, picking up the pace, and building in intensity. I imagine folks dancing with wild abandon to this one at the group’s performances, then perhaps being surprised at the next turn the track takes, the horns issuing some sort of warning. This track feels like an exciting story. That’s followed by another original tune, “Professional Development,” this one written by Dave Morgan. It begins with a lead on bass, and soon this one too takes us on a fun ride, with bright tones and colors all around.

“Rock Bottom” is a title that seems to describe perfectly the country under the command of racist gameshow host Donald Trump. We as a nation have hit our lowest point. This song, however, is a total delight. It comes on strong, like a beast eager to devour whatever may lie in its path, thumping through the neighborhood, then later moving almost to frenzy, with a strong pulse and an appetite, those horns circling us. This one too takes an unexpected turn in the second half, toward rock with that electric guitar. This is another original track, written by Rob Susman and Noel Cohen. The album then turns to rock bands for inspiration, first with a cover of The Beatles’ trippy “Blue Jay Way,” a song written by George Harrison and named after a street here in Los Angeles. Funk Shui NYC, not surprisingly, gives the tune a funky spin, and it works quite well. The band follows that with a wonderful cover of Cream’s “I Feel Free,” a song that was covered by Belinda Carlisle in the 1980s. This version has all the energy you would ever hope to cram into the song, and is just fantastic. It feels like a party, like a celebration that extends for several blocks, on rooftops and in the streets. The album then wraps up with a delicious rendition of Allen Toussaint’s “Everything I Do Gonna Be Funky.” And really what could be more fitting for this band? Plus, this track includes a drum solo, so I am in heaven here.

CD Track List
Shark NATO On A Plane was released on February 7, 2020.
Posted by Michael Doherty at 6:36 PM