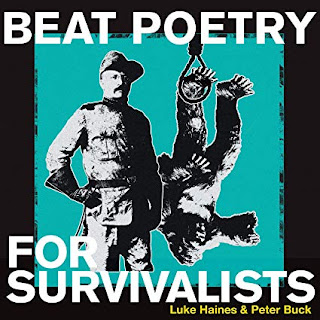 I’m not sure just what I was expecting from these two guys, but whatever it was, this album immediately exceeded it, opening with a delightfully strange song titled “Jack Parsons.” Jack Parsons was an odd guy who was both a rocket scientist and a member of a weird cult. The song begins with the question, “Is anybody there,” which is usually how you start a Ouija board session. The answer comes: “Jack, Jack, Jack, Jack.”  This track features some wonderful lyrics, like these lines: “You see, rock fuel makes me horny/Terra firma kinda bores me/I want to be up there with the angels/I want to fall back down to Earth with the angels.” This track offers some surprises along the way, as the song shifts to Janet Hodgson, who became famous as a child in 1977 when her house was haunted. When she and her sister were interviewed at the time, the man conducting the interview tried to contact the spirit by asking “Is anybody there?” A small portion of that interviewed is included on this track.

The album continues to address unusual subjects with “Apocalypse Beach,” which contains Donovan references at the beginning: “Just me and Donovan Leitch/‘Atlantis’ or ‘Season Of The Witch’” (mentioning two of my favorite Donovan songs). There are references to other people, such as Maria Callas and Jacqueline Du Pré, but the song then returns to Donovan. By the way, if you don’t own the Barabajagal album, I highly recommend picking up a copy. “Apocalypse Beach” is followed by “Last Of The Legendary Bigfoot Hunters,” which begins from the perspective of someone who claims to have seen Bigfoot, then says he is each of the members of the Ramones. Hey, you figure it out. I am just enjoying the ride. Then we get “Beat Poetry For The Survivalist,” sort of the title track. Ah, is it coming to this? It seems like we might all have to become survivalists. (Do you remember that Robin Williams/Walter Matthau film, The Survivors?) A lot of us entertain these weird visions of survivalism, and what we would do. What would be the items we’d need? This song provides a sort of checklist, but certainly we would not need a Kiss record, right? In that case, I think I’d rather not bother. “Smoke weed in America/Everybody down/Dig deeper down/Under the ground/Underneath the ground/Forever.” Yeah, there is some humor here. But I think there is a lot of fear behind our humor these days. I mean, seriously, what the fuck is going on out there? Well, we can dance to “Witch Tariff,” a song that returns us to contacting spirits: “Sitting in the dark, pushing a glass/Tap, tap, is that Johnnie Ray/Is there anybody out there on Billy Fury Way.”

In high school I took a class called Contemporary American Culture, which included having to write a long paper on one individual who had an important impact on the culture. The person I was assigned to write about was Andy Warhol. I was fascinated by him, but more so by those who surrounded him, such as the Velvet Underground and Candy Darling. Warhol himself seemed rather cold and distant to me, from my research. I was reminded of that by the track “Andy Warhol Was Not Kind.” “Build a wall the length of China/A wall that you can see from space/Calling out to all Venusians/Andy Warhol was not kind.” That’s followed by “French Man Glam Gang,” a tune with a delicious slow groove. I love that crazy whispering of “discotheque.” This is a strange song of cannibals. “We dress in black/Go our own way/Like Fleetwood Mac.” This one was written by Luke Haines and Scott McCaughey.

“Ugly Dude Blues” begins in a wonderfully harsh bluesy realm, and features a wild, unhinged vocal performance. There is a bit of a Troggs vibe, which is acknowledged in the album’s liner notes. Joe Adragna plays drums on this track. “All the girls laugh and all the kids cry/Whenever I walk by.” That’s followed by “Bobby’s Wild Years,” the title of course reminding me of Tom Waits’ “Frank’s Wild Years.” This is a song about a hairdresser, and the lyrics contain a reference to the opening lines of Charles Dickens’ A Tale Of Two Cities. The album then concludes with “Rock ‘N’ Roll Ambulance,” a mellower number, a song to ease us into the great unknown, taking us in a “rock and roll hearse.”

CD Track List
Beat Poetry For Survivalists is scheduled to be released on March 6, 2020 on Cherry Red Records and Omnivore Recordings.
Posted by Michael Doherty at 2:24 PM