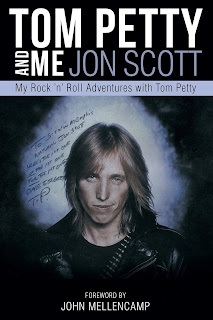 In 2017, a friend asked me if he should buy me a ticket to see Tom Petty And The Heartbreakers at the Hollywood Bowl. I wanted to go, especially as I had somehow never seen Tom Petty in concert, but I had to fly to Boston the next morning and figured I’d be too rushed and too tired. “Let’s see him the next time he plays,” I said. And I didn’t go. That show, of course, turned out to be Tom Petty’s final performance. I’m still sad that I missed it. One person who did not miss that concert was Jon Scott, a man who was instrumental in launching Tom Petty’s career. In fact, Tom Petty even dedicated a song to him that night. He writes about that show, and about his long career promoting Petty’s music, in his new book, Tom Petty And Me: My Rock ‘n’ Roll Adventures With Tom Petty.

Author Jon Scott is a fellow music lover, and his passion for music – especially, but not limited to, Tom Petty’s music – is clear on every page. Interestingly, his story begins with him losing his job. He was fired from MCA, then soon hired by Charlie Minor at ABC Records. Oh, if only everyone’s firing could be so advantageous. It was at his new job that he first encountered the music of Tom Petty (well, except for the Mudcrutch single he’d heard earlier), and the strange anecdote of finding that unlabeled record in his office closet rings true. Those of us who love music have all experienced this from time to time, upon discovering some new musician or band – that tremendous, world-opening joy, followed by an intense desire to share the music with everyone we know. (Hell, that’s the precise reason I started this blog.) And reading this book, I was getting those same chills that I had when I first heard Petty (or, for that matter, some of the other music groups who had that effect on me, such as The Peak Show and Josh Lederman Y Los Diablos). Jon Scott’s passion for the music will likely bring up that excitement for anyone who reads the book. And it is a good thing for all of us who enjoy Tom Petty And The Heartbreakers that he had that passion, for the label was planning on dropping the band before he begged for the chance to promote them.

The book has plenty of great anecdotes, such as his rather surprising first meeting with Tom Petty backstage at the Whisky A Go Go. And there are notes from the road, with Jon Scott offering a different perspective on touring than what is usually written in rock and roll tales. I love the story about getting to their show in Boston, where they opened for J. Geils Band. I was also kind of fascinated by the dynamic among artist, manager and promoter. And there is some interesting material about how decisions are made regarding radio playlists and so on. Jon Scott writes: “This was the beginning of media mergers and the use of data to make creative decisions. Media ownership groups bought up FM stations around the country and were just starting to hire professional radio consultants, who did extensive music research and then told station management what songs the listeners wanted to hear” (p. 44). I was lucky, for when I was a radio DJ, I worked at KWVA and could basically play whatever I wanted. Later in the book, Jon Scott talks about his work at KCSN, and that section certainly took me back to my time at KWVA.

But perhaps the most interesting material is on the different ways Jon Scott promoted Tom Petty And The Heartbreakers. Promotions such as the “radio station frequency tour” and the private listening party of Southern Accents at Tom Petty’s house are wild. And I love the New Year’s Eve party idea. The book contains several photographs, including a copy of the 1977 letter sent to radio stations programmers with a live version of “Breakdown.” The book basically goes in chronological order, and so at the end there is a chapter about that final concert, a concert I should have attended, the concert where Tom Petty dedicated “I Won’t Back Down” to the book’s author.

Tom Petty And Me: My Rock ‘n’ Roll Adventures With Tom Petty was published in 2018 through CB Publishing, a division of Chickasaw Buddy, Inc. It includes a foreword by John Mellencamp.
Posted by Michael Doherty at 5:14 PM