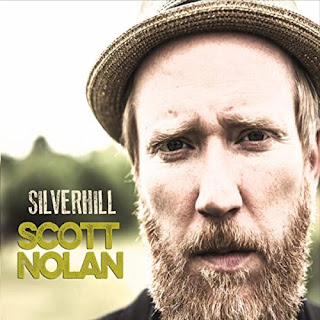 Friends, as you know, the world has gone sideways, and sometimes it can be too much to handle. We try to find that balance of being informed without being overwhelmed, without succumbing to anger and despair, and it’s difficult. Music is the one reliable antidote to the lunacy perpetrated by our current administration and a significant (though dwindling) segment of the population. It’s a good idea to take a break from the news reports of Donald Trump’s latest lies, and put on a good CD. We need this to retain our health, our sanity. One disc that will help in this regard is Scott Nolan’s Silverhill. I sometimes think if it weren’t for the calming, friendly, honest sound of songs like these, I would completely lose it. The best writing, whether it be in songwriting or novels or whatever, succeeds in doing one thing – letting us know we are not alone. Sounds simple, but this message is extremely important for us to hear regularly, perhaps especially now. And this album does it well. On this disc, Scott Nolan is joined by the group Willie Sugarcapps (Will Kimbrough, Anthony Crawford, Savana Lee, Grayson Capps and Corky Hughes). All tracks are originals, written or co-written by Scott Nolan.

Scott Nolan opens the album with “Forever Is A Long Time,” a beautiful, mellow tune. The first lines are: “The highway’s a ghost that you can see/Hey, don’t forget about me/Freezing rain, Texas to Tennessee/Slept right through Arkansas/In the back seat.” Hey, don’t worry about sleeping through Arkansas. You didn’t miss anything, trust me. I’m going to add this song to my road trip play list. It’s followed by “The Last One,” which might also work on a road trip mix CD. The line that always stands out for me is “Saying my prayers through a bullhorn.” Not bad, eh?

“Shake It Loose” is a fun, bluesy tune, with the backing vocalists providing that needed humorous, delightful element as they repeat “Shake it loose, shake it loose.” How can you help but smile? And check out these lines: “My heart strings fall out of tune/The house is on fire, baby, dinner was ruined.” That is followed by one of the album’s most beautiful and moving songs, “Trouble & Love.” This one was written by Scott Nolan and Mary Gauthier. “Blizzard outside, blizzard in your heart/Lonely travelers and cheap motel art/Snow’s falling on snow that fell on snow/I said hold on, baby, please don’t let go.”

“When Can I See You Again” is another highlight, with its sweet sound. And with my girlfriend at the other end of the country, the question “When can I see you again?” feels rather pertinent and personal. This song works to bring us closer, like a shared mental caress, which will have to suffice until we get that next physical one. “Can’t stop thinking about you/You’re always on my mind/Starting over now/Going to get it right this time/When I get that sinking feeling/I can’t drown the pain/When can I see you again.” And I love that fiddle toward the end. Then in “Curls & Curves,” Scott sings, “Love’s a crazy game, sometimes you get what you deserve.”

“Silverhill,” the album’s title track, is an interesting track in as much as it seems to be about the very writing and recording of the album. The song’s lyrics mention some of the other musicians: “Kimbrough’s cracking jokes,” “Grayson Capps is tops,” “Corky’s steel guitar moans.” My favorite line, however, is, “And me here trying to type poetry into a cellular phone.” Though he is based in Winnipeg, Scott Nolan recorded this album in Loxley, Alabama, near Silverhill. The title track is followed by “Twister,” a playful country number to lift your spirits. It’s a song about playing Twister, with lines like “Right hand red, my left foot blue/I got myself all tangled up in you.” Hey, red and blue – is this song really about our nation getting twisted, or am I reading too much into the choice of colors? That line also strikes me as a play on Bob Dylan’s “Tangled Up In Blue.”

The album concludes with “Leave It Alone,” which was written by Scott Nolan and Hayes Carll, and features some beautiful playing. “With no plans worth making/All the good dreams were taken/When you leave this world/You leave it alone.”

CD Track List
Silverhill was released on February 10, 2017, though it seems it was released with a different cover a year ago.
Posted by Michael Doherty at 4:06 PM