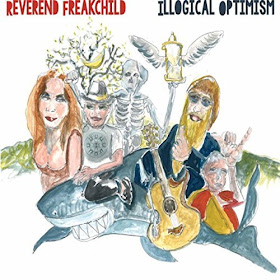 Reverend Freakchild’s new album, Illogical Optimism (a title I really like), is a three-disc set full of blues, as well as rock, folk and country related to the blues, with some interesting covers. The second disc is a series of variations on “All I Got Is Now” (a song from his previous release, Hillbilly Zen-Punk Blues), while the third disc is actually a Ramblin’ Jennings CD.

Disc 1: Odds, Ends And Other Amazingness

Reverend Freakchild kicks off the first disc with a strange, bluesy take on John Lennon’s most famous and most moving song, “Imagine.” In general, I don’t like when people put their own spin on this song, but I have to admit I dig this interpretation. His vocal approach reminds me just a bit of Martin Sexton. He then gives us a great dose of New Orleans fun with “Hey Pocky A-Way,” a party song originally done by The Meters (though the first time I heard the song, it was a version by the Grateful Dead). Reverend Freakchild does a great job with it, and there is a section with just drums and vocals. I also love the piano. Have yourself a little Mardi Gras party any time of the year. The fun continues with “I Still Have Joy,” with a delicious choir joining in this gospel celebration. “Thank God I still have joy.”

Reverend Freakchild then dips into country with a good version of “Cryin’ Holy Unto The Lord.” Of course, this rendition has a good dose of blues, and features a wonderful vocal performance, as well as some great stuff on guitar. And then check out the harmonica on “Who You Do Love.” Reverend Freakchild changes the age of the character of that song, singing, “I’m just forty-three but I don’t mind dying.” He then delivers an interesting and surprising rendition of Bob Dylan’s “All Along The Watchtower.” It begins sort of like a rock rendition, then suddenly goes in a different direction, toward ska, and with a sort of spoken word delivery. Yes, unexpected, and yet it works really well. “There are many here among us that feel that life is but a joke/But you and I, we’ve been through all of that/And by no means is this our fate.” And, oddly, in the next line, “So please let us not talk falsely now,” he starts to sing, “So please let us talk falsely,” but catches himself on “ta-”and then corrects himself: “not talk falsely.” And what’s that, a didgeridoo solo? What a crazy version. And it leads into “Shark Boogie,” a silly song that begins with a nod to Jaws, then goes into ZZ Top’s “La Grange,” sort of. “So I had this strange dream about Jennifer Tilly and the Dalai Lama/We was in the studio, doing some remixes, man.” There is one lick on guitar that is repeated a few times which reminds me of The Misfits. And there is a joke about jumping the shark.

“Sweet Sweet You” comes as a surprise, with a kind of dark folk feel and lyrics that mention John Lennon, Janis Joplin, Jimi Hendrix, Robert Johnson. “The only thing missing was you/Sweet, sweet you.” It’s one of my favorite tracks. That’s followed by a fantastic, hard, powerful rendition of “See That My Grave Is Kept Clean,” another of the disc’s highlights.

Reverend Freakchild opened the album with a John Lennon song, and toward the end of the first disc does another John Lennon composition, “Yer Blues,” from The Beatles’ self-titled double album. He really focuses on the song’s heavy blues edge, and this rendition seems to have a more serious feel than the original. Then, after “Even hate my rock and roll,” the band changes tempo, and gives it more of a rock feel, turning the tune into a jam. “Death Don’t Have No Mercy” is another song I first heard from the Grateful Dead, and here Reverend Freakchild delivers a cool, loose rendition.

The first disc concludes with “Plastic Jesus/Working On A Building,” an interesting combination, and a bizarre track. “Plastic Jesus” contains the sound effect of a car starting after the line about the “Plastic Jesus sitting on the dashboard of my car.” And then it just gets weird, going from John Cougar’s “Jack And Diane” to Tracy Chapman’s “Fast Car” to lines from Hannah And Her Sisters, and eventually getting to a funky version of “Working On A Building.”

Disc 2: Everything Is Now

The second disc contains variations on “All I Got Is Now,” a song that was the lead-off track on Reverend Freakchild’s Hillbilly Zen-Punk Blues, which was released last year. This disc contains a lot of different sounds, different types of music, such as blues, reggae and punk. Some are wonderful (like the folk version), others less so (like “The Bardo Of This Life,” which got on my nerves after a while). The first track, “Once Upon A Time Called Right Now,” is a bit of goofy funk – goofy mainly in the exaggerated vocal delivery. “Use some extra psychedelic mayonnaise on it.”  That’s followed by a blues rock version of “All I Got Is Now.” “Yesterday’s a history/Tomorrow’s all a mystery/All I got is now/I keep forgetting that somehow.” Oh, we all tend to forget that, don’t we?

There is also a slow reggae rendition, with an appropriate change to the Jesus line. One of my favorites is “All Gotta Na’,” a folk version featuring harmonica. This take on the song works really well, and has a loose, lively vibe. I also really dig the French version. I wish this three-disc set contained more information about these tracks; for example, who is singing on this track? Well, whoever it is does a great job.

“Everything Is Now…” is a slow, deliberate rendition with a haunting quality. It’s the longest version on this disc, at more than eight minutes. The second disc then concludes with a cool, slow bluesy instrumental version titled “Now?” This is another of the disc’s highlights.

The third disc is from Ramblin’ Jennings, and features mostly original material. This is acoustic blues, with a great raw feel and a gospel bent. The disc opens with “Safe In The Storm,” with a prominent harmonica. “Lord, keep me, keep me safe in this storm/You know I’m just a lonely pilgrim.” One of my favorites is “Please Send Me,” which begins with some loose guitar. Ramblin’ Jennings’ vocals have a soulful, rough quality. This song feels like it comes at the end of an eventful, tough, tiring day, or even life. Then on “Sinner Blues,” his vocals are accompanied only by harmonica. “Lord help me, Jesus/Help me change my wrongs to rights.”

“Now let’s try something a little bit different here,” he says before starting “Silver Sandals,” another of my personal favorites. This one has something of a sweeter, more intimate tone. “She is part of something that is beautiful/A pretty little part of a great big plan/Somebody loves her/Somebody holds her.” It’s a passionate, wonderful song. Ramblin’ Jennings follows that with a rendition of “John The Revelator” delivered a cappella. The third disc then concludes with “Last Train Blues,” a lively number featuring harmonica. “I’m going to ride that train to freedom/Won’t be coming back.”