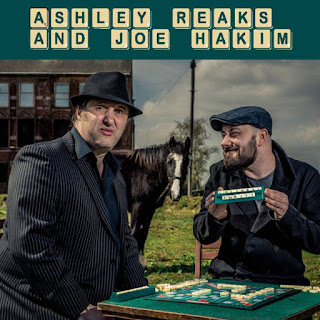 Ashley Reaks is a musician and collage artist who seems to be constantly voyaging into interesting new areas, both musically and artistically (if you care to separate the two, that is, and I’m not sure he does). I was just recently turned onto his music, and from what I’ve heard so far, each album has a distinct sound and approach. For example, he released two CDs in 2014. The first, Compassion Fatigue, is a strange pop album in which the first song is exactly a minute long, the second two minutes long, and so on; the other, This Is Planet Grot, is a full-forced punk album. His newest release, Cultural Thrift (his second release of 2015 and eighth overall), is a collaboration with poet Joe Hakim, in which Joe provides the spoken word vocals and Ashley provides the music, playing bass, guitar and keyboards. This isn’t the first time the two have worked together; Joe Hakim appeared on a couple of tracks of Reaks’ previous release, Before Koresh, including the wonderful “I Want To Get A Celebrity Pregnant.” They are joined by Maria Jardardottir on vocals; Dave Kemp on saxophone, accordion, melodica and guitar; and Nick Dunne on guitar (all of whom also appeared on Before Koresh and earlier releases). The music incorporates elements of pop, jazz, and hip hop, each track feeling well-crafted to allow the lyrics to have the biggest impact.

Cultural Thrift opens with “Nature Poem,” which has a strong, prominent beat and some nice stuff on saxophone before Joe comes in on vocals. And when he does come in, the music relaxes just a bit to support him, with a very cool bass line. I love the slight pause Joe gives after the word “fresh” in the line, “Here, there is continuity and the brutality of pure air offset with the bitter-clean aroma of fresh manure,” giving the line a bit more humor. But the lines I love most are these: “I’m surrounded by the mating calls of Anlaby Road’s traffic/That’s my natural habitat/I guess I’m just built like that.” Those are the song’s final lines, and they come just a little more than halfway through the track, allowing for a cool instrumental section featuring some excellent stuff on saxophone and electric guitar.

That’s followed by a track titled “Albert Hofmann’s Bicycle,” which opens with the phrase, “Falling off,” which is perfect. And check out these lines: “as we make ill thought-out points/about nothing in
particular, surrender our vernacular,/in a desperate bid to appear spectacular/in each other’s eyes.” Nice, eh? The music begins to build, but then just as the vocals reach the final few lines, the instruments drop out to allow full focus on the lyrics. Interestingly, those last lines come only halfway through the track, and so the band then rises, and this second half features some wonderful vocal work by Maria Jardardottir. And then I love the saxophone on “To Let.” Toward the end of that track, the bass, saxophone and vocals work so well together to create a kind of fun atmosphere.

“The Principles Of Paranoia” features references to pop culture – to Spider-Man, The Matrix and Star Wars, all within the first few lines. It’s interesting to begin that way, to express a paranoia that could be serious with lighthearted references to mainstream culture. Is it as if he wishes his paranoia weren’t so serious, and wants to disarm his own troubles with these references? Or it could be to bring us all aboard, to disarm us, as it were. And this comes after an eerie musical introduction, setting us at unease. And haven’t we all had moments when we can relate to these lines: “Suddenly strangers who seemed safe seconds ago/shift in their seats and stare.”

“Special Brew Blues” begins with a gorgeous, foreign pop vibe, putting us in a certain mood. So the opening lines of the song, when they come, have more of a humor by their surprising juxtaposition: “S’only about one-sixty a tin, so it’s a bargain/by any fucker’s reckoning.” And I can’t help but appreciate these lines: “So fuck all of you who sup bottles of Bud/in shitty nightclubs/at three quid a go, buying into/a dream of a self-image/that will melt like snow/and soak into the dirt and the mud.” And just the word “Cheers!” leads into a very groovy instrumental section. And then the lines in “Imposter Syndrome” that stand out for me are: “Like a washed up nightclub singer gone insane/from repeatedly doing the same requests.” (By the way, yes, that's how it’s spelled on the CD, rather than “Impostor.”)

“Everyday” begins like a club dance tune. What I especially like is the mix of negative and positive feelings in the song’s final stanza: “I haven’t paid a bill in months, and/many, many sofas bear the imprint/of my arse. But today, the sun is out/and I’m having Szechuan Sensations/and half a bottle of Shiraz for my lunch./And to be honest,/it'll do.” The album then concludes with “The Way It Is,” about living from paycheck to paycheck, and not living up to one’s potential, to the point where it’s questioned whether it exists at all. A depressing subject, to be sure, but the line “So broke, I haven’t bought a decent TV in years” always makes me laugh. I think a lot of us can relate to these lines: “Thinking I’m better than this/even when I’m pissing away my potential/like it doesn’t exist.” And to these, which end the CD: “Praying before I go to sleep/something will come along/and lift me out of the shit/and make all the struggling worth it,/while at the same time/I have to try and accept/that this is just the way it is.”