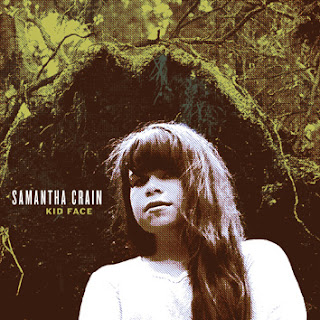 The opening song, “Never Going Back,” starts with nice work on acoustic guitar, and then adds violin – and I’m totally on board. And then Samantha Crain begins to sing, and that’s when I know this album is something special. I immediately love her voice. The first lines are, “This horse that kicked me in the heart/Then asked me if I want another start or ride/He leaves me thirsty, leaves me dim/I’m lookin’ at a picture of him and his bride/Oh, I’m never going back.” This song has a great happy feel.

There is something interesting in the way she delivers a line, particularly on a tune like “Taught To Lie,” with its slower groove. It’s part earthly, rooted deep in our world, and part angelic, coming from some other land.  It’s a magical combination, a voice I’m eager to follow.  She sings, “I’ve learned to tell the truth sometimes.” Everything I hear from her sounds like truth to me.

Even more than the two previous tracks, her vocals drive “Paint,” especially at the beginning, before the piano comes in. Here is a taste of the lyrics: “I don’t want to be a cynic/It’s much too soon for that/Still it feels like something’s missing/And that’s a real drawback.” This song features a nice guitar part, and then the violin comes in like another voice, like a backing vocalist. I appreciate the way Samantha uses instruments in her songs, each doing only what is needed, nothing more – it’s not like she’s trying to fill a space.

On “The Pattern Has Changed” her voice is weary and vulnerable, beautiful. She sings, “Changing my clothes though they’re the only thing I own now/Coming off the road though it’s the only way I know how/The pattern has changed, not over time but a shift in the ground/What is spare time? I spend all of mine trying to figure this out.” At moments the piano is silent, letting her voice speak right to us, close to us.

And in “Kid Face,” the album’s title track, her voice has a strength, a resilience, like the voice of a survivor. “Oh I still got a lot of fight before I settle down/Looking for standards in a country of cancers/Oh the land of my fathers where everything dies.”

“Somewhere All The Time” is a happier country-folk tune that immediately makes me smile. It’s a really good traveling song, and makes me itch to get on the road. I love the vocal line of this song. And then near the end there are some backing vocals, and yes, this does seem like a sing-along. I wish it went on a little longer in that vein.

In “Sand Paintings,” her voice is almost a whisper at times. It then rises and builds on “And I know it looks like rain” and then dips immediately on “but nothing’s going to change.” This song has a cool groove that pulls you in right away, and then later features some interesting and surprising use of electric guitar, and a wild ending over a strong pulse. “I won’t be hard on myself if you’ll be kind to you.”

All songs on this album were written by Samantha Crain. This is an album I’m going to be listening to a lot.

Kid Face is scheduled to be released on February 19, 2013 on Ramseur Records. This is her third full-length album. She has also released Songs In The Night (2009) You (Understood) (2010), as well as an EP titled The Confiscation: A Musical Novella (2007).

Posted by Michael Doherty at 4:50 PM