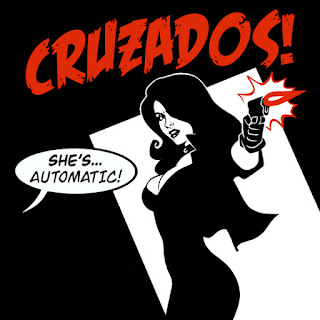 The Los Angeles band Cruzados formed in 1983 and released a couple of albums in the mid-1980s, and made an appearance at the beginning of Road House, before disbanding in the early 1990s. The band at that time was made up of Tito Larriva on lead vocals and rhythm guitar, Marshall Rohner on guitar (replacing original guitarist Steven Hufsteter), Tony Marsico on bass, and Chalo Quintana on drums. Marshall Rohner and Chalo Quintana have since died. Bassist and songwriter Tony Marsico now brings back the Cruzados name with a new lineup and a new album, dedicated to the memory of those members who have passed. For this album, Tony Marsico recruited three members of the hard rock band Little Caesar – Ron Young on vocals, Loren Molinare on guitar, and Mark Tremalgia on guitar. Rounding out the group is Rob Klonel on drums. Joining them on She’s Automatic are some special guests, including Dave Alvin, Steve Berlin and David Hidalgo. Much of this rock music has a raw bluesy element, and the album features all original material, written or co-written by Tony Marsico.

The album opens with “On The Tilt A Whirl,” a song that is a hell of a lot more enjoyable than the ride it is named after, and features some good work on guitar. When we were in our teens, a friend vomited on the Tilt A Whirl and tried to hold it in his mouth until the ride could be stopped. Each time we passed the ride’s attendant, we tried to get his attention to stop the ride. But to no avail. On one turn, my friend was no longer able to hold it in. There were three of us on the ride. He was in the middle. None of us was happy. That was the last time I ever went on the Tilt A Whirl. “When your feet leave the ground/And the blood rushes to your face/When the world spins upside down/You’re in the right place/Hold tight, round and round we go.” Buck Johnson is on keys on this track, and on the one that follows it, “Across The Ghost Town,” which also features some nice backing vocal work by Gia Ciambotti, adding a somewhat haunting, beautiful tone, fitting for the song’s setting. Then “Nine Million Tears” comes on strong with a steady, driving force that is instantly appealing. There is also more excellent work on guitar. Plus, this track contains some good lyrics. “Nine million tears will fall/Before our final call/One long last kiss good-bye/One night before we die.” This is one of my personal favorites.

The title track, “She’s Automatic,” has a Bo Diddley rhythm, which always works for me. This song describes a dangerous, perhaps unstable woman, though does so with a certain amount of affection. Ah, isn’t that the way? This track features some fun, lively guitar work. It’s followed by “Son Of The Blues,” which has a southern bluesy rock vibe, reminding me a bit of ZZ Top’s style. This one was co-written by Barry Goldberg, and is another really strong track. The group then moves more into the country realm with “Sad Sadie,” which features Bill Maresh on pedal steel and contains possibly the album’s best vocal performance, helping to make it another of my favorite tracks. Also, John Doe (from X) provides backing vocals. “Was it me, baby, that made you cry?” Another thing I like about this song is its hopeful aspect, heard in the line “The sun will shine again if you give it time.” “Long Black Car” is another that reminds me of early ZZ Top, in its sound and because it has that kind of confident coolness about it. Plus, it’s about a car. This one was co-written by Rick Vito, and features some delicious work on guitar. “Through the night we followed the star/Down the road to hell in a long black car.”

Dave Alvin joins the group on guitar on “Let Me Down,” a seriously enjoyable rock tune that will likely have you moving and shaking. There is a good sense of humor to this one. “When I’m dead, when I’m gone, put me in the ground/One last time, one last time, you will let me down.” And David Hidalgo (of Los Lobos) plays accordion on this track. Oh yes, this is certainly another of the disc’s highlights. The high energy continues with “Wing And A Prayer,” which delivers another great dose of rock. That’s followed by “54 Knockouts,” a totally cool track that features some nice work by Buck Johnson on piano. And Steve Berlin (of Los Lobos) joins the group on saxophone, making this one a lot of fun. Things get even cooler with “Rock That Boat,” the album’s closing track, which begins as a slow, bluesy gem and then kicks in. This one features Jimmy Z joining on harmonica.

She’s Automatic is scheduled to be released on August 13, 2021 on Scamco Records.

Posted by Michael Doherty at 5:05 PM